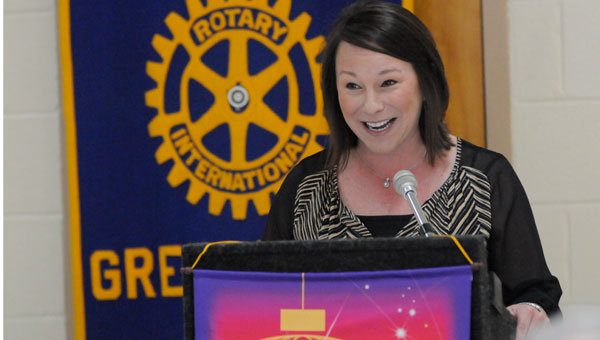 Roby began by saying that it was the greatest privilege to fight for the rights of men and women in uniform, but added that the fight is becoming an increasingly difficult one thanks to budget concerns due to sequestration and the Budge Control Act (BCA) of 2011.

“Fifty percent of the cuts came out of the United States’ military budget,” Roby said in regards to the reduction that sequestration would force.

“I may be young, but I’m not stupid.  I’m not voting for a bill that would allow our military to be decimated for us to solve our budget problems on the backs of the men and women who put their lives on the line for our freedom.  That was my position then, and that is my position now.”

Roby and others voted for the Bipartisan Budget Act of 2013, which delayed full implementation of sequestration for two years.  The two years will run out on Oct. 1, at which point Roby said America will face a real problem.

Roby added that  Secretary Robert Gates said that prior to the BCA, if the United States maintained its trajectory for military spending, it would be right at about $611 billion, which would be the bare minimum necessary to prepare for war, wherever it may be.

“All we have to do is look at the world around us.  The lack of leadership in the White House has created a void, so you have people like Vladimir Putin stepping up boldly trying to fill that void in leadership.

“You have people like ISIS, which is pure evil, that is expanding throughout the Middle East.  What are we going to do about it and what role will we play militarily if we don’t have readiness capability?”

Roby’s chief concern came from the fact that n Oct. 1, if the Budget Control  Act is not changed, the budget for military spending becomes $523 million no matter what.

“So we’ve got to figure out how to find the political will in this Congress to step up and do the right thing on behalf of our national security,” Roby said.

Roby also briefly discussed her role on the Benghazi Select Committee, as well as her overseeing the current restructuring of the Central Alabama Veterans Affairs Office in lieu of the termination of its director, James Talton.

“We continue to closely monitor progress and setbacks, and they are well aware that I’m not going away,” Roby said.

Roby closed by reiterating the potential damaging effects sequestration could have, even on a local level.

“We will continue to fight together, but Congress has got to have the will to fix this,” Roby said.

“It’s not going to magically fix itself.”