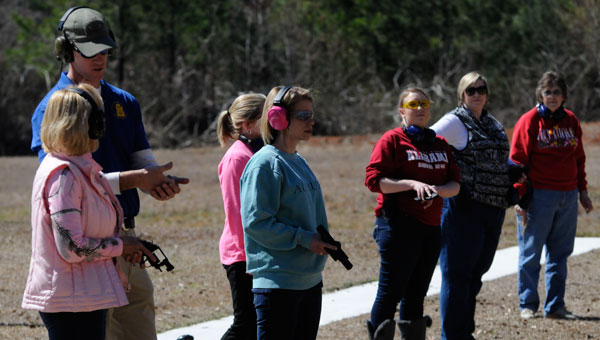 Greenville Police Department Captain Justin Lovvorn was one of several officers that helped 20 of the area’s women become more familiar and comfortable with loading, firing and carrying various handguns.

“The district attorney, Charlotte Tesmer, wanted to get a gun familiarization course set up for women in the area,” Lovvorn said.

“And we’ve done it in the past from time to time.  It’s just been a little while since we’ve done it.  She basically supplied all of the food and extras out there for the people that came.”

Tesmer said that it was her own personal experiences that inspired her to offer a similar opportunity to other women in the area.

“When I first got appointed three years ago now, a lot of the law enforcement felt like I needed to carry personal protection,” Tesmer said.

“There were some other things going on throughout the country as far as DAs being attacked and whatnot, so I went through the course.

“Since then, I’ve had several friends and acquaintances ask about gun safety courses, and the Greenville Police Department was willing to give us weapon instructors.”

The eight-hour course began at around 8 a.m. with a four-hour morning segment that taught everything from the basic functionality of a gun to safety issues when handling a firearm as well as current laws and pistol permit concerns.

After lunch, it’s off to the gun range.

“We put them through a course that helps them get used to the gun and gets them familiar with how to work it in a real situation,” Lovvorn said.

“And we work on accuracy and things like that.  We’re not necessarily going to have them shooting expert before they leave, but they will be better than they were when they came; we can just about guarantee that.”

Tesmer said that the hands-on experience was especially valuable to her, even though she’d been around guns since a young age.

“Me growing up, we’d go to the country and shoot, but my dad or somebody else always loaded the gun and all I did was shoot it,” Tesmer added.

Lovvorn added that, in lieu of headlines concerning accidental weapon discharges with children, there is always a need for learning about gun safety, regardless of age.

“What I’ve found is that the thing that seems to work the best is not necessarily keeping them away with guns or telling them that they should be around them, because for kids especially it just increases their curiosity about it,” Lovvorn added.

“You tell them not to do something and that’s the first thing they’re going to do when you turn your back to them.

“As a kid grows up and there’s going to be a gun in the house, we’d like them to be familiar with that gun, know how to use it. And not just say stay away from it, but also let them see what it does and why they should stay away from it. And then they’ll learn to respect it.”

Demand for the course was much higher than anyone thought, as a course set for next Saturday, March 21, is already at capacity.

But the department plans to hold another event in April or early May.

For Tesmer, the value in the course is obvious.

“I think the ladies really got a lot out of it,” Tesmer said.

“They feel more comfortable handling a gun, and that’s what they need—whether they’re going to carry it or have it at home for personal safety, they need to be comfortable and confident in the way they use it.”