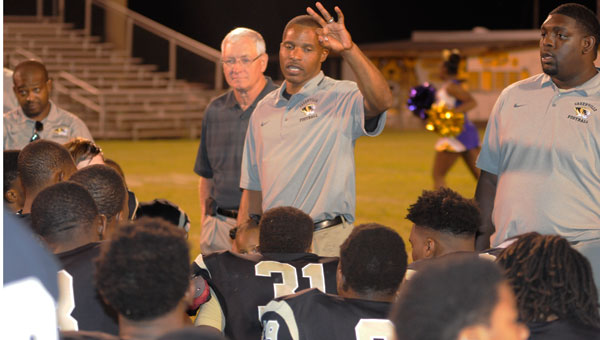 Greenville head football coach Patrick Plott resigned Wednesday. Plott will be heading to Auburn High School, where he will serve as an assistant coach beginning on April 6.

Plott will serve as an assistant coach for the Auburn High School Tigers varsity team, beginning on April 6.

The disappointing season followed a 2013 championship appearance against Hoover, and also marked the Tigers’ worst record since 2003.

“Right now, we’re still a little shocked, but we’re going to put it together, come up with a plan of action and move forward as soon as we possibly can,” Dean said.

Though Plott didn’t cite a particular reason for his departure, Dean added that his absence would certainly be felt.

“He came in, he embraced the school, the students and the faculty, and he brought a great group of coaches along with him.  He did the hard work behind the scenes that produced wins on the field on Friday nights.”

No decision has been made regarding the coaching staff that Plott brought onboard to Greenville, though Dean said that he would hold a meeting with them early next week to discuss the next steps.

Dean wasn’t the only person caught off guard by the decision, as starting sophomore quarterback Brandon Simmons said he was similarly rendered “speechless” by the news.

But Simmons said that it was gratitude that he felt most.

“For a man that has taught me so much in just one year, I’m going to miss you, coach,” Simmons said.

“As a sophomore, you gave me the opportunity to play and win.  It’s been the best year I’ve had since I started playing football, and if I ever need anything I know who to call.”

Plott will remain at Greenville High School for the rest of the month, but the time period will not encompass spring training.

Despite that, Dean said that deciding on a new coach would be based on finding the right person rather than the time frame.

“I thought we had the right person, and I still feel in my heart that we did, but he found what he perceived to be a better opportunity for him and his family,” Dean said.

“So now we have to do the same thing.  The Greenville High family wishes him and his family well in their new endeavors.”

Plott led the Greenville Tigers to a 8-2 regular season and a third-round playoff appearance before falling to Jackson 30-7.

He also led Pickens County High School to a state championship with a 15-0 record in 2013.

Though attempts to reach Plott were successful, he declined to comment.

Greenville will hold its first-ever Camellia City Fest, a downtown event full of entertainment, arts and crafts and food, on... read more