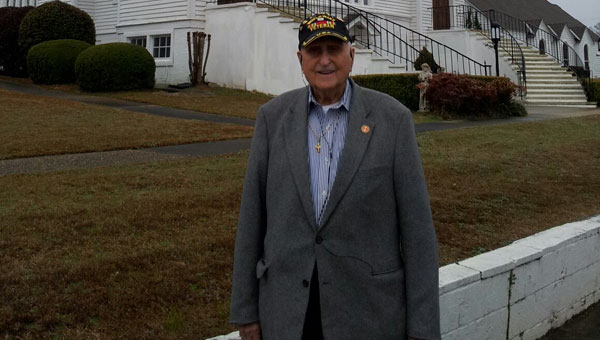 One local veteran’s story began more than 90 years ago barely 20 miles up the road from the Camellia City, but little did he know that it would take him halfway across the world in the midst of the darkest moments of the 20th century.

These days, however, it’s a story that World War II veteran Col. Glenn D. Frazier is hoping to share with the world.

“Looking at the world through the cotton and corn fields of Lowndes County, I could never have imagined that in just a few short years the entire world would be engulfed in war and that I would be caught in the middle of it,” Frazier said.

“Where I lived, events in Europe and Asia, as menacing as they were, seemed light years away.  I would soon discover that they were not so far away after all…”

So reads the beginning of Frazier’s emotional memoir, titled “Hell’s Guest,” that details the story of an Alabama boy who ran away to join the army at the age of 16.

Six months later, he found himself a captive of the Japanese’s camps for prisoners of war (POWs).

Upon his return to the United States in 1945 following three years of captivity, Frazier detailed his life in Japanese prison camps in the Oct. 26 edition of the Lowndes Signal in 1945.

“The first winter in Japan was very bad,” Frazier said.

“The Japanese had enough that they could have kept us warm in those days, and they could have fed us better, but they didn’t.  They were at their high tide, and the worm hadn’t turned yet.  We had no stoves in our barracks, and not enough clothes on our backs.  And we didn’t have nearly enough food.

“Later on, we couldn’t expect much in the way of food, but they at least improved in other respects, for we got stoves in our barracks the next two winters, and with the coal which was issued us plus that which we stole, we were able to keep warm all right.”

Frazier also detailed the unique perspective of being in Japan as the atomic bombs obliterated Hiroshima and Nagasaki.

“They came running to us asking us to help them do something about it. ‘You’re Americans,’ they said, ‘tell us what to do to defend ourselves.’

“They didn’t seem to know that we American prisoners were just as surprised by the atomic bomb as they were.”

The best-selling author’s latest book, “Hell’s Guest,” can be purchased from colonelfrazier.com/store/.