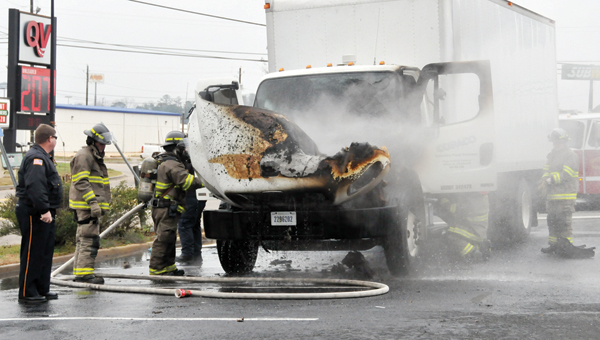 Engine trouble became much more troublesome Monday morning as a truck engine caught ablaze in the parking lot of the Texaco gas station next to I-65. | ADVOCATE STAFF / ANDREW GARNER

Greenville firefighters and police officers responded to a truck engine that set fire Monday morning in the parking lot of the Texaco gas station adjacent to the interstate.

GFD Chief Chad Phillips said the truck driver noticed he was having some issues with his engine.

“It started getting worse and he pulled over here,” Phillips said.

Phillips said the truck wasn’t carrying anything hazardous, and that the fire was centrally located in the engine compartment.

“Thank goodness he wasn’t holding anything hazardous,” he said.

Phillips said no injuries were sustained as a result of the fire.