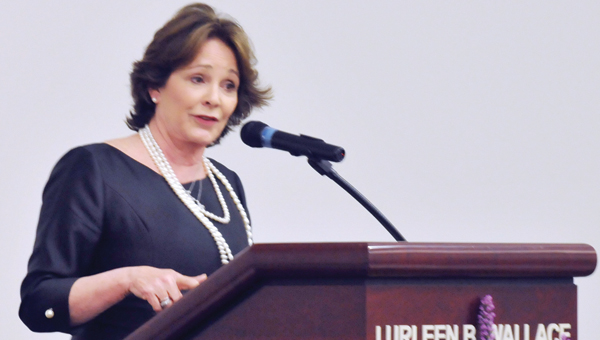 Patricia “Sister Schubert” Barnes credited three different people in her life whose names started with the letter “G” for her success in the grocery business.

Barnes, the founder of Sister Schubert’s Rolls, was the guest speaker at the Greenville Area Chamber of Commerce’s Member Banquet on Thursday night at LBWCC’s Wendell Mitchell Center.

Also known as “Sister” christened by her sister, Charlotte, Barnes said the three people who helped her get to where she is today are her grandmother, Leona Henderson Wood who she called “Gommey” while growing up; George, Barnes’ husband; and God.

“I’ve been making speeches for over 20 years now and have been in places in Tupelo, Miss. and Washington, D.C., but never have I been invited to speak in my own backyard, so to speak,” Barnes said. “I’ve lived in Andalusia for almost 20 years now; right down the road and I feel like I’m with friends and neighbors.”

Barnes remarked about how she’s visited the Camellia City as she took advantage of the Robert Trent Jones Golf Course and shopped here.

“Your Mayor (Dexter McLendon), who I’ve had the opportunity to meet, and I recognize the energy he’s brought to the community,” she said, adding that Greenville Area Chamber of Commerce Executive Director Francine Wasden who is on the industrial board, also brings an energy to the city

“I feel like there’s a common link between Greenville and Andalusia,” Barnes said.

Barnes’ “Cinderella” story on how she started her now nationally-known rolls business started 25 years ago.

“From the time that I could climb up on a kitchen stool and hold a spoon, I’ve loved being in the kitchen,” Barnes said.

Barnes learned a lot about cooking from her family, namely Gommey, who taught her how to bake the famous Parker House Rolls.

“Then it became my job to make them for family gatherings,” she said. “I believe that when we’re born, God has a plan for each one of you. Everything that happens to us in life is in preparation for that plan.”

It so happens that Barnes’ father and grandfather were entrepreneurs, as they owned a furniture business in downtown Troy.

After college, she worked in the furniture business and tried her hand as a flight attendant.

Throughout this time in Barnes’ life, the love of cooking never left her.

“I was sure I was on the right path, but cooking and baking never left my heart,” she said. “The happiest I ever was, was in the kitchen.”

She started a small catering business on the side with her furniture business duties, and her popularity grew when more and more customers requested that she make her famous rolls. In fact, during her research for her first cook book in 1994, she found out that Gommey named the Parker House Rolls Everlasting Rolls.

Five years previous in 1989, Barnes was asked to bake rolls for a frozen fair at her church. She was a little reluctant because she knew she had to make and bake them the same day.

“Now, I’m introducing you to God in my life because I know it was Him that said it was OK to freeze these rolls,” Barnes said. “Sure enough when I took them out of the freezer and thawed them, and then baked them, they were perfect. That meant it. So, here I was.”

Three years later, her roll orders increased to 300. Barnes then thought about making these rolls for people other than for the holidays, thus birthing Sister’s Schubert Rolls.

After trying to sell her rolls to Fleming Foods in Geneva, the frozen food buyer suggested Barnes get a food broker.

This is where George comes into the picture.

She said she’ll never forget the first time she met her husband. George arrives late to the meeting and in full golf attire.

“I showed him my rolls and he said, Are they any good?’” Barnes said. “I said they’re the best rolls you’ve ever eaten and they’re wonderful.”

George then toured Sister’s bakery before trying to make a sales pitch at a larger grocery chain.

Some time passed and Barnes was soon making 1,000 cases of rolls for grocery stores. George helped spread her product all over the Southeast.

Pretty soon orders outpaced the production facility in Troy, and a manufacturing plant was built in Luverne. Since then, there are two additional plants and now the company makes more than 9 million rolls a day.

In 2001, the Barnes sold the company’s stock to Lancaster Colony Corp. out of Columbus, Ohio.

Barnes said they sold it for two reasons — to help give the rolls a national name and to be able to still run the business.

Barnes still works with her company working on research and development. George retired more than six weeks ago.

Through the sale of the company, the Barnes set up the Barnes Family Foundation and formed Sasha’s House, a ministry in the Ukraine that offers a home for families and orphans.