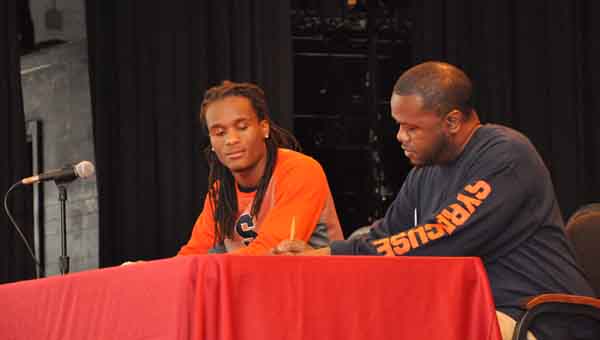 Just one week ago, Kenterius Womack figured his football career had come to an end.
A senior quarterback for Luverne, Womack had just finished an illustrious career with the Tigers, but as National Signing Day came and went, he found himself without any offers to play college football. Recruiters just didn’t seem interested.
“Its just a small town,” Luverne head football coach Ethan Carroll said on Womack not receiving offers. “I think its just kind of a small town syndrome, and you fly under the radar. Not many people come through Luverne looking for football prospects.”
That all changed, though, last Monday.
Having not done so yet, coaches from Luverne decided to send a highlight video to recruiting website PrepsNation to bolster some interest in Womack from schools around the country.
What happened next was a whirlwind four days for Womack and the coaches at Luverne.
Within the next few days, Womack and his coaches were hit with a barrage of phone calls. Somehow, some way, the video had spread to just about every school in the country.
Womack found himself receiving interest and even offers from big-time schools like Michigan, Syracuse, Arizona, Nevada and Connecticut, just to name a few.
“It (the video) spread like wildfire,” Carroll said.  “It’s a really shocking story.”
By 9 a.m. Monday morning, Carroll and his coaches were holed up in a classroom, fielding phone calls from upwards of 50-60 colleges.
“It was like the whole recruiting process took place in one day rather than a few months,” Carroll said.
And by the middle of the week, Womack had nearly made a decision.
On Wednesday, he flew alone to Syracuse to visit with coaches. At that point, Womack had already made his mind.
“It was the people,” Womack said. “They were nice and they treated me like family. It just felt like home.”
Though Womack committed to Syracuse, that didn’t stop a few other schools from making plays on the senior quarterback.
Michigan’s interest still remained strong and Arizona offered Womack a scholarship just hours after he decided on Syracuse. But through it all, he still felt strongly about his decision to join the Orange.
“He’s a very religious kid and he felt like it is his time and God had a plan,” Carroll said.
Tuesday afternoon, Womack officially signed his letter of intent to join Syracuse.
Womack, who also played wide receiver for the Tigers, was recruited as an athlete and will join a Syracuse roster with four quarterbacks already on it. But his coach said he wouldn’t be surprised to see Womack stay at quarterback in college.
Womack’s father, Kevin, said his son would likely play defensive back or wide receiver, but he could see his son filling the quarterback position in the near future.
“They’ve got a senior (quarterback) this year. So, there’s a good chance he might get to play pretty quick,” Kevin Womack said.
The 6-foot-3, 185-pound Womack, a three-sport athlete, is also the No. 2 scorer on Luverne’s basketball team and an All-State shortstop for the Tigers. But, football was always his first choice.
“Football has always been my sport. It’s just competitive and physical,” he said after Tuesday’s signing. “God just blessed me with the skills.”
He plans to add to those skills. He gained several pointers while in Syracuse.
“I’ve got to gain weight, get stronger and bigger. I’ve got to fix a couple of mechanics,” he said.
Carroll said Womack’s achievements on and off the field show what kind of a person the Syracuse football team is getting.
“Kenterius is one of those kids that you never really have to worry about on and off the field,” Carroll said. “The other day in the recruiting process, he was at the little league baseball field teaching kids. He’s just that type of guy, really. He’s a good kid and he’s got a good family.”
His former head coach, Mike Dubose said he was excited about the opportunities that lay before Womack.
“He’s a great young man with a great future,” Dubose said. “He’s going to be successful with or without football.”
Womack plans to major in sports management.