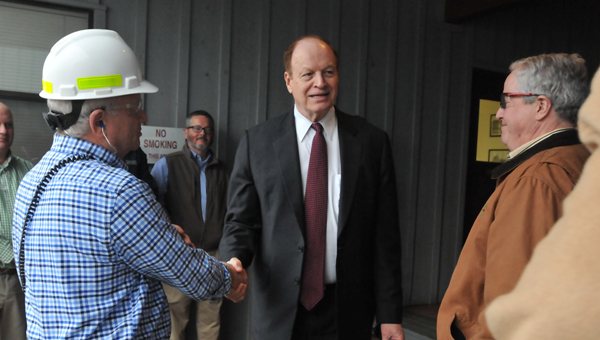 U.S. Sen. Richard Shelby, R-Ala., visited a “heartbeat” of the Butler County economy on Monday as part of his statewide tour to promote industry and jobs.

Shelby, along with other dignitaries and officials toured Coastal Forest Products in Georgiana, which manufactures plywood and timber.

“It’s good for me to do this,” Shelby said. “I just started (the tour). This is my second day. It’ll take me three to four months to cover the state.”

Coastal Forest Products Vice President of Manufacturing Jim Pattillo guided Shelby on the tour through the heart of the wood-making products facility.

Shelby viewed the expansion from the control room and used that opportunity to ask questions about the company, which runs 24-7.

The senator wanted to know how many are employed at CFP, to which Pattillo said 327 are working in the mill.

Pattillo explained how the driers worked for the plywood and answered other questions from Shelby.

“I’m interested in the people of the United States and Alabama,” Shelby said. “I want you to do well.

Pattillo said a lot of work went into the expansion.