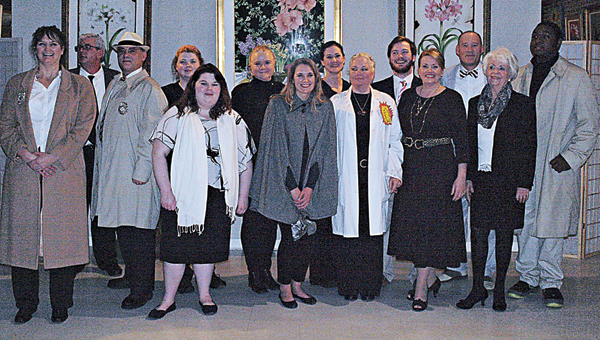 Following their meal, guests strolled across the street to Mary McKinley’s art gallery.

Mollie Smith Waters, president of the GCT and director of spy spoof “Dirk Smirk, Secret Agent,” promised a production that would tickle the funny bones of the full house in attendance.

The 15 amateur actors in the cast didn’t fail to deliver, earning lots of laughter and applause throughout the show, along with a standing ovation at the end.

It was no “walk in the park” to make the production a reality, Waters said.

“You know we only had about a month of rehearsal time, and everybody’s been fighting various bugs. I couldn’t be happier with how everything turned out — they were fabulous,” Waters said with a smile after the show. “Of course, we could not have done it without the cooperation of Ann Judah and Mary McKinley.”

Some of the GCT players performing Saturday night will also appear in the cast of the Greenville Area Arts Council’s upcoming “Putting on the Ritz” and its tribute to Broadway in April.

The next GCT production will be their annual summer play at the Ritz Theater, with GCT member and Ritz Player Jimmy Ansley is slated to direct.

Ansley is keeping the title of the summer production under wraps, but promises another light-hearted comedy for the community to enjoy.