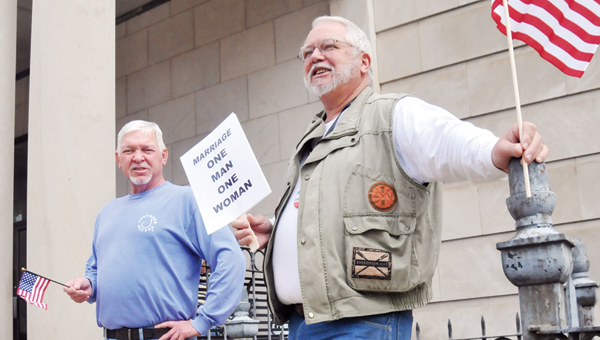 Concerned citizens camped outside the Butler County courthouse for about an hour Monday afternoon to protest the U.S. Supreme Court’s ruling to not stop same-sex marriages in Alabama.

Many of the peaceful protestors had signs that read, “Marriage: One Man. One Woman;” “One Nation Still Under God;” and others had scripture from the Bible.

“We didn’t Monday,” Norman said. “I made a decision (Monday) morning based on information to not issue any licenses at all. We didn’t have any requests.”

Norman said no requests have been submitted.

“The governor expressed his position (Monday) afternoon and based on that and some other information we got from the federal court, I decided the right thing to do legally was to sell licenses,” he said, “unless something else happens.”

Norman said his decision was based on more information that came to light on the ruling.

Two weeks ago, U.S. District Judge Callie V.S. Granade ruled in favor of the same-sex couple from California, and ruled that the constitutional amendment the state passed in 2006 was unconstitutional.

After Granade’s ruling, Alabama Attorney General Luther Strange filed a motion with the 11th Federal Circuit Court in Atlanta, requesting the judge give a two-week stay on the ruling. His request was denied, but filed another stay with the U.S. Supreme Court. The highest court of the land denied the request.

“It’s unusual to make an order without a case,” Norman said.

Since Monday, Alabama Gov. Robert Bentley issued a statement saying that he would not enforce Moore’s order.

“When we got that information, I decided that I needed to follow the federal court order, and that’s what we’re doing,” he said.

“We’re just standing up for our rights,” Johnson said.

Wesley Henderson said he is “very much concerned” with the ruling.

“I believe God says that marriage is between a man and a woman,” he said. “God can’t be satisfied. We need to try to get people to look to God, instead of man.”

Norman said those who want to get a marriage license need to come to the probate office and ask for an application. On the application, the information that needs to be filled out is name, address and parents names, etc.

“Once we get all the information, we’ll issue a marriage license,” Norman said.

Norman said — as he has done for heterosexual marriages — he will perform a same-sex marriage ceremony.

“As Probate Judge for the last 12 years, I have had the privilege to perform countless marriage ceremonies for many citizens of Butler County,” he said. “I can’t count the times that someone has approached me in the grocery store or Wal-Mart and reminded me that I had ‘married them at the courthouse,’ or had young couples come in my office to be married ‘like their folks had done’ years ago.

The cost for a marriage license is $40.