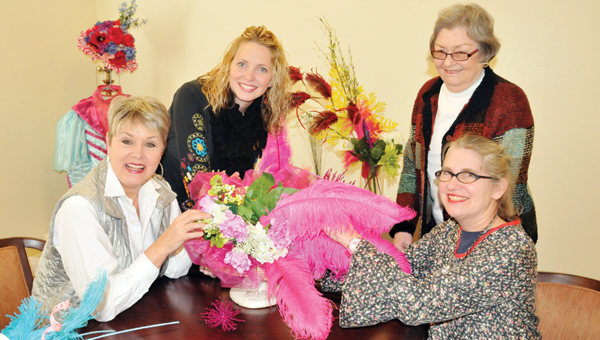 Shown from L to R: Nancy Idland, Alaina Norman, Marion Norman and Joni Thomas pose with one of the hats that the Country Place Senior Living residents are refurbishing. | ADVOCATE STAFF / ANDREW GARNER

Frilly feathers and a rainbow of colors were evident on hand-made hats that are being refurbished by a hat-making group at Country Place Senior Living in Greenville.

The small group has been meeting every Thursday afternoon since Jan. 12 to get the hats and other accessories ready for the annual production of the “Putting on the Ritz” fundraiser, which will be the Ritz Players’ salute to Broadway. The show is slated to be held April 23-25.

Country Place resident Bobbie Gamble, who was the production chair for the Greenville Area Arts Council (GAAC) for about 25 years, is helping with the project that will clothe the actors.

“I’m just sort of handing out my love,” Gamble said.

Gamble was an essential piece to the puzzle that helped keep the Ritz Theatre from being torn down and renovating it for stage productions. She said big props go to former Greenville Mayor Ernie Smith for his assistance with the theatre.

Nancy Idland, the current executive director of GAAC, said the arts council came to be after the theatre was restored.

“The council has been bringing professional shows into the theatre for almost 35 years now,” Idland said.

Idland said “Putting on the Ritz” is more than a fundraiser for GAAC.

“To me, it’s community; it is really one thing in our town that’s brought people from all walks of life together to perform,” she said.

Gamble said the plan is to refurbish costumes and hats from one of the shows the theatre churned out eight years ago.

Idland said the hat group at CPSL is a great example of the many who are involved in the process of helping put on the fundraiser.

“It’s something everyone looks forward to,” Idland said. “This is a great opportunity to have these ladies involved. It just helps pull the whole thing together for a whole town to be a part of.”