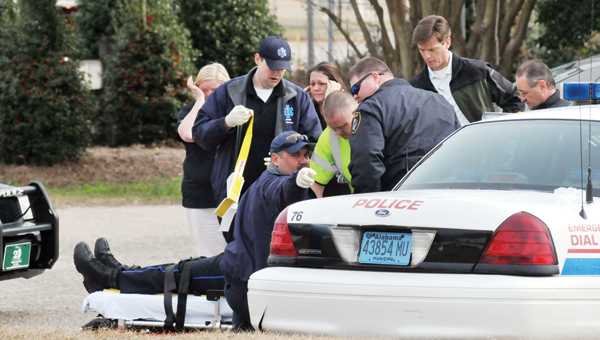 Two separate wrecks occurred within minutes of each other in Greenville on Tuesday morning.

The first incident took place near Alabama Power on the bypass, and involved a car and a pickup truck.

Greenville Police Chief Lonzo Ingram said the truck failed to yield and collided with the car.

“The driver of the car was transported to the hospital by the fire department,” Ingram said, adding that there were no serious injuries.

The second incident occurred when a GPD officer was responding to the first wreck.

Ingram said that Officer Roberto Jones was en route to the bypass incident when he had to leave the road way on East Commerce Street to keep from hitting another vehicle.

“He came over the hill and apparently a vehicle pulled out from a business over there, and he had to leave the roadway to keep from hitting the vehicle,” Ingram said. “(Jones) left the roadway and of course, knocked the telephone down and had extensive damage to the car.

“We’re just glad he’s not injured,” he said about Jones. “We’re certainly glad the people who were involved weren’t injured in the accident as well.”

Jones left the roadway adjacent to Artesian Utilities, snapped a light pole in half and came to a complete stop in the water company’s parking lot.

The GPD, GFD and GEMS Ambulance Emergency Service responded to the scene on Commerce Street.

No other details were available on the incident on the bypass as of press time Tuesday night.