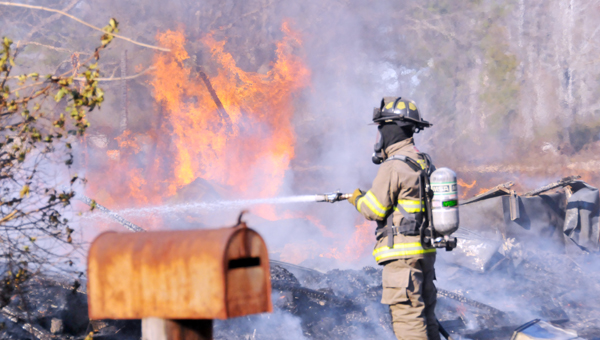 A Greenville fire fighter works to extinguish a Simpson Circle home after it caught fire from a control burn this afternoon. | Advocate Staff / Andrew Garner

Craig Griffin was almost finished remodeling a house and was at the stage of burning some ground around the island of his family’s parcel of land.

Griffin said the fire was out, but the wind started it back, adding that he thinks it carried over to the house, which was set ablaze.

“We put so much work into it,” Griffin said. “We were about there.”

Griffin and his brother, who are both carpenters by trade, spent the last week working on the house, which took firefighters quite some time to extinguish.

Griffin said a lot of amenities inside the house were lost in the fire, and was hoping it would provide some funds for his mom, who is a retired nurse. Fortunately, there wasn’t anybody in the house.

However, he said he’ll just clear the land out and put a trailer in so somebody can rent it out.

The Greenville Fired Department, the Butler County Sheriff’s Office and the Central Volunteer Fire Department all responded to the scene.