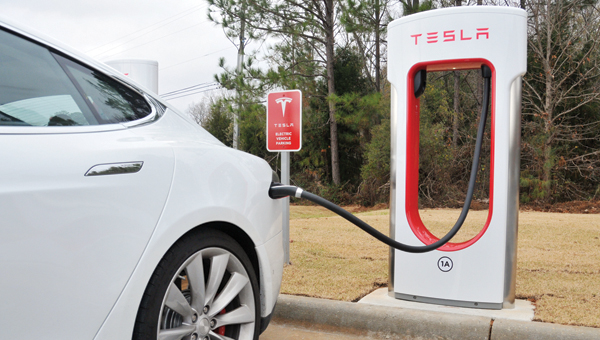 ADVOCATE STAFF / ANDREW GARNER |
Six Tesla Model S charging stations are located behind the Hampton Inn in Greenville. This is the first charging station in the state of Alabama.

Sameer Patel’s main objective as a business owner is to help and see Greenville grow.

The Hampton Inn owner decided a good first step would be to install Tesla Model S charging stations. Behind the hotel, there are six supercharging stations for the owners of the all-electric car.

In 30 minutes, the car will be fully charged.

“Compared to some of the charging stations you have installed in your house, it takes eight hours,” Patel said.

Patel said Tesla approached him about setting up a charging station at his hotel.

“They had actually picked out three markets — Auburn, Mobile and Greenville,” he said. “Greenville is actually the first city in the whole state to get the station.”

The charging cost to Tesla Model S drivers is free. On a full charge, the supercharging station can net a driver 170 miles, according to Tesla’s website. More specifically, it’s 58 miles of range per hour of charge.

“People from Montgomery and Foley stop by and charge up,” Patel said. “Up to 10 cars have stopped by and charged up here already. You wouldn’t think that Greenville would have these.”

Patel said he’s had the charging stations for about a month now as they were installed in late November.

“This is still brand new,” he said. “When there’s a charging station near by, it pops up on the navigation screen. If anybody is going through on I-65, this is the first place.”
In his view of things, Patel said he hopes there are more people who will buy electric cars.

The High Horse Gallery on Commerce Street was abuzz with paint strokes and excitement Thursday night during the Painting Party... read more