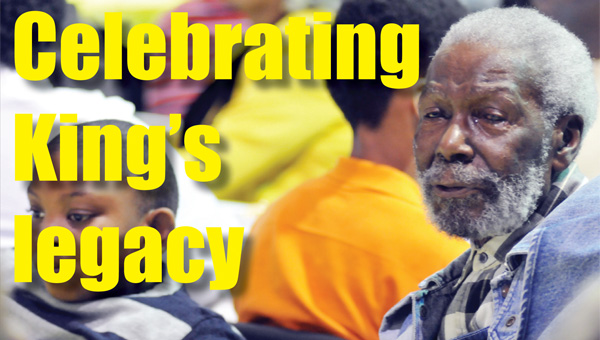 The breakfast, which was held to honor King on the national holiday, consisted of quality gospel music, greetings from county dignitaries, a recitation of King’s famous “I Have a Dream” speech, a keynote speaker, a presentation and the giving away of door prizes.

Throughout the breakfast festivities, one theme rang out over the crowd: Injustice anywhere is a threat to justice everywhere.

To help send the message home, the keynote speaker — the Honorable Tracie A. Todd — spoke about the historical significance of King’s message, that it’s a time to act and that the work is not done.

“I want to begin with a quote from Dr. Martin Luther King Jr.,” Todd said. “It says, ‘we must accept finite disappointment, but never lose infinite hope.’ We have to remember our past in order to go forward in our future. If we don’t, we’re doomed to repeat it.”

Todd, who was elected to serve as a circuit court judge for the 10th Judicial Circuit Criminal Division in Jefferson County, is one of the youngest sitting judges in the state.

Because of King’s legacy, Todd said she wouldn’t be where she is today.

“I’m so thrilled to be here on a day like (Monday),” she said. “If it hadn’t been for a day like (MLK Day), as it already has been said, people like me wouldn’t be serving in the position that we’re serving in.”

Todd earned a bachelor of arts degree in international business and Japanese studies in 2001 from Dillard University, and went on to receive her juris doctorate from the University of Alabama School of law in 2007.

Todd serves as a Japanese language interpreter with Topre America, a start up company in Cullman.

Using her skills as an interpreter, Todd gave a riveting and electric speech to the tuned-in crowd.

She talked about the “unsung heroes” of King and the Civil Rights Movement, noting how her great-grandfather — David Hall — allowed marchers to sleep on his patch of land between Selma and Montgomery to escape the long journey.

“Because his willingness, they froze his credit, closed his bank account, threatened to hurt his children,” she said as the crowd groaned. “David Hall died before he had the opportunity to vote, but think about the sacrifice that this unsung hero made to the movement because they could not march from Selma to Montgomery without a place to stay.

“After David Hall, there were four camp sites of people who sacrificed their land,” she said. “Because of David Hall, his great-granddaughter can stand before you today, an elected official, where people voted to put her in office.”

Todd used the rest of her speech as a call to action.

Near the end of Todd’s speech, she reminded those listening that the future isn’t certain, however.

During the greetings portion of the breakfast, Greenville Mayor Dexter McLendon said that Hwashin America purchased 100 tickets for the film “Selma.”

Additionally, McLendon talked about the Willie Mae Robinson collection of artifacts and memorabilia from the Civil Rights era that’ll be on display from March 3-7 at the Greenville Butler County Public Library.

Georgiana Mayor Jerome Antone, who marched with King as a 5 year old, said King paved the way for his generation and the generation of today.

“He had a great plan,” Antone said. “But remember, we’re not at the finish line yet.”