Ingram: This is the best police department 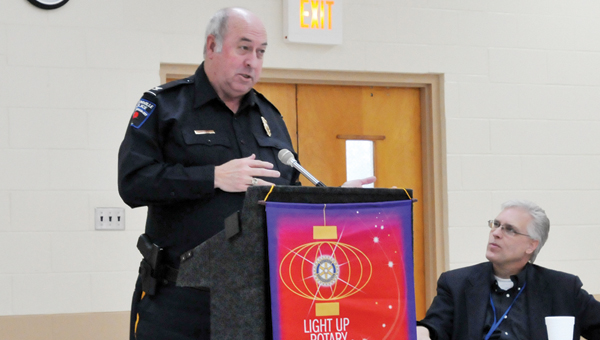 Greenville Police Chief Lonzo Ingram said the city’s police department is the best its had since he’s lived in the Camellia City.

Ingram has served as the city’s chief for 30 years. He said Mayor Dexter McLendon is the third mayor he’s seen since holding the head position at the department, and added that councilman James Lewis has held the same seat since he’s been chief.

For his program, Ingram talked about the state of the police department, a few national issues and intertwined funny anecdotes to keep the members entertained.

“It costs the police department more than $200,000 a month to operate,” Ingram said.

Ingram went on to say that the GPD operates with a line item budget with 54 items, noting that they start working on the budget in June so it can take effect in October.

“It’s a long process,” he said. “The police department is the largest department in the city. With ours being the largest using the most money, 1-3 percent over, it amounts to a lot of money.”

“This is the best police department we’ve had since I’ve lived here,” he said. “This is a good place to work. We have qualified and certified people who are waiting for the opportunity to come and work with us. We don’t have a problem getting people.

“Many years ago, we had a revolving door thing going on,” he said. “We were always in a hiring process. Thank the lord that’s changed over the years, and we’re able to pay our people a decent wage.”

Ingram touched on the cost of fueling police cars and how it fluctuates because of the increase — and nowadays the decrease — of gas prices.

“It takes a lot of money to operate these police cars,” he said. “The most effective crime deterrent in this country is a police car moving around.”

At the most recent city council meeting, the council approved an expenditure for the department to purchase two new interceptors, worth some $50,000 total.

With technology advancing these days, the cost of buying equipment for officers has gone down, Ingram said, adding that the department is “pretty much paperless at this point.”

To help offset expenses on the department, Ingram said grants sure do help, a lot. However, they are hard to come by, he said.
“Grants are difficult to get right now from the federal government, from the state government,” he said.

On the events that took place in Ferguson, Mo., recently, Ingram said he, along with any other officer you ask, thinks that the situation was mishandled.

Additionally, the equipment officers used at the scene wasn’t necessary, he said, citing that they utilized the defense department’s DFMO program, which allows law enforcement agencies to acquire equipment that’s not being used anymore.

During the ice storm, the GPD’s Humvees came in handy, Ingram said.

“When we had the ice storm, our Humvees were wonderful,” he said.

During the question-answer portion of the program, Ingram was asked what an event like what took place in Ferguson could do to a small city like Greenville?

Ingram said to prevent that from happening, it starts with laying a good foundation.

“You’re always concerned about it, but you lay the groundwork for a long time,” he said. “They had a 60 percent black population with one black police officer. You have to treat people with respect; you’ve got to communicate with people in the community. You’ve got to treat people fair. That’s what we do.”