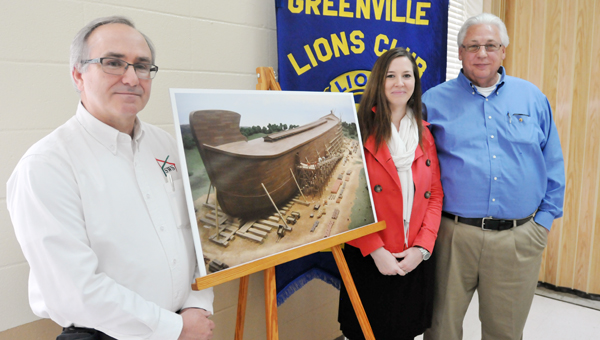 Shown from L to R: Ricky Taylor, Nicole Salter and Ricky Cargile pose for a picture next to a picture of Noah’s ark. | ADVOCATE STAFF / ANDREW GARNER

Structural Wood Systems is taking on a project of Biblical proportions as the Greenville wood company will be contributing to the build of a full-size replica of Noah’s Ark.

The ark, which is being built in Williamstown, Ky., will utilize 400,000 board feet of SWS’s laminated timber for the project. SWS, which is a division of Harrison Industries, Inc., is partnering with The Troyer Group, Inc. and Crosswater Canyon, Inc.

Salter said the park is scheduled to open sometime in 2016.

“They haven’t set a date yet,” Salter said. “This is actually going to be the first phase — phase 1 — of several phases. It’s not really a theme park, with rides, but they are going to have attractions.”

Salter said there will be live shows, and it will be located near the Creation Museum in Petersburg, Ky.

“It’s somewhat like a big Bible theme park,” she said.

The ark replica will be 513 feet long and 80 feet wide. Inside, there will be several levels, which will house different exhibits, programs and shows.

Salter said to prepare the foundation for the ark, 1.6 million cubic yards of soil had to be moved. Members of the Williamstown Amish community are handling the construction of the ark.

“When it is completed, it’s going to become the largest infrastructure in the United States, and one of the largest in the world,” she said. “It’s a really big deal for us to be involved in it, for us to have gotten this project. We’re very excited to be working with the owner of this.”

Salter said the ark, when complete, will be composed of all sorts of wood. Most of the SWS product will be located underneath the ship, and will be comprised of timber and wood glued together to form huge beams.

When asked how they came by this project, Salter and Taylor said it came about through company scouts all across the country.

Salter said a scout from Indiana met with the owners (Ark Encounter, a privately-owned LLC and Crosswater Canyon) repeatedly about the project. In the end, SWS provided the right bid, winning out over a company in Arkansas.

Production of the SWS wood for the ark hasn’t begun yet, Taylor said, but he said the company will start shipping out to the Kentucky project in April.

The whole project is privately funded. As of Monday afternoon, Ark Encounter had raised $17,640,305 out of its $29.5 million goal.

Salter said when the park is complete it will employ some 900 people.

“We’re just really excited to take a part in it,” Salter said. “It’s very historic. Nothing like this has ever been done, and for it to be the largest timber structure in the United States and one of the largest in the world, it just says a lot that we here in Greenville are actually able to participate in something this monumental.”