Gym memberships to surge in February

When the clock strikes midnight on New Year’s Eve, one would think that people will start clamoring to sign up for gym memberships to help fulfill their resolutions.

That’s not really the case for Trinity Fitness owner Vicki Phillips, who said that people tend to wait until February to sign up.

“It’s starting to (pick up),” Phillips said about business. “I’ve got some specials running in January. My Facebook activity has been higher and I’ve had more inquiries and phone calls.” 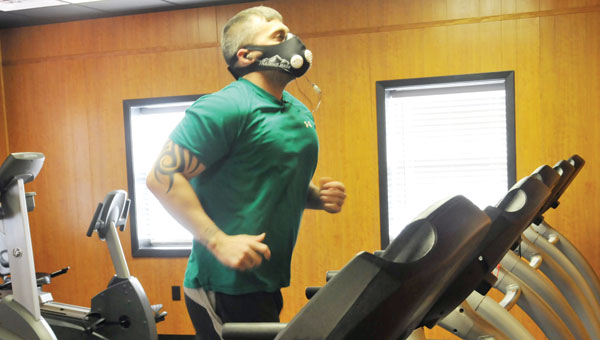 Chris Stinson runs on the treadmill Wednesday afternoon during his routine workout while wearing an elevation mask, which allows athletes to receive benefits of high-altitude training from home.

Phillips said the trend for people is to wait until January is over to avoid the crowds.

“February is worse than January,” she said.

On a typical day at Trinity Fitness, the busiest time of the day is early morning and late afternoon.

Phillips said business is steady year round except for when a lot of folks get busy with ball season.

“It’s actually picked up,” she said. “During the ball season, people get really busy with their kids.”

As of Wednesday, Phillips said she’s just waiting on the new crowd of exercising enthusiasts to show.