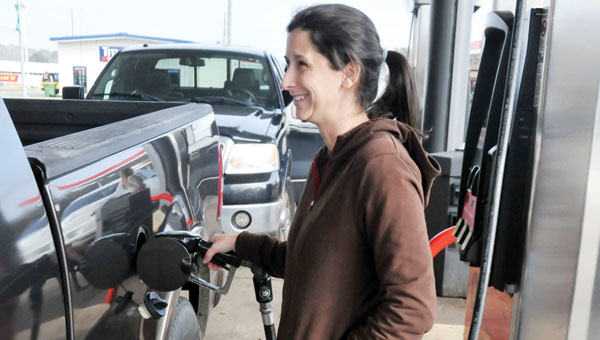 Karla McDavid of Mobile fills up her truck at the QV gas station Wednesday afternoon. Gas prices in the state have dropped significantly as of late.

The weather isn’t the only thing that’s dipped recently.

According to the AAA’s fuel gauge report, the national average of a gallon of gas is at $2.257 as of Wednesday morning.

The decrease in gas prices has been a national trend in recent weeks.

For the state, the average price of a gallon of gas was $3.120 for regular unleaded.

Two states — Missouri and Oklahoma — have seen gas prices fall below $2 a gallon.

The national average has fallen 95 days in a row for a total of $1.06, and prices have plummeted $1.38 (nearly 40 percent) since the start of June, according to a AAA press release.

AAA estimates that drivers are saving more than $500 million per day each day compared to the highs in both the spring and summer.

The global oil market remains in a state of perceived oversupply due to record production from the United States combined with lower than expected global demand. Despite falling crude prices, Saudi Arabia, OPEC’s largest exporter of petroleum, has reiterated the cartel’s intention to maintain current production levels and allow the market to self-correct. This move could put pressure on production with higher cost production areas, such as the United States, facing a market where low prices make production unprofitable. The ripple effects of prolonged low oil prices could also pose a challenge to countries whose economic stability is dependent on revenue from oil production. As has been the case in recent years in Egypt, Libya and Iran, this sort of geopolitical unrest can impact global supply and pressure oil prices higher on the threat of a disruption.

Going snowhere — Butler County shut its doors when the snow-pacalypse blanketed the county in late January. The snow made many... read more