The largest methamphetamine dealer in Butler County has a new form of identity — inmate No. 7051. 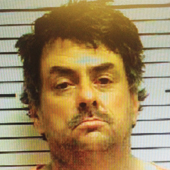 Roger Donell Armstrong, of McKenzie, was arrested at his McKenzie residence on Dec. 17, and charged with unlawful distribution of a controlled substance, trafficking and possession of methamphetamine.

Butler County Sheriff Kenny Harden, along with Greenville Police Chief Lonzo Ingram, said in a press conference on Monday that officers with the 2nd District Drug Task Force, the GPD, the Drug Enforcement Agency, the BCSO and McKenzie Police Department, executed a search warrant on Armstrong’s home at 26 North Street in McKenzie.

“It was a good day in Butler County,” Harden said. “By executing the search warrant, we were able to take off (of the streets) the largest (methamphetamine) dealer we have in Butler County.”

Harden said the DTF has been working for “several months” on the case, “making buys from (Armstrong).”

By arresting Armstrong, authorities were able to ascertain who his supplier was.

“When you make an arrest like this, many times it spreads out to other people being arrested,” Ingram said. “That was the case in this investigation. By arresting this individual (Armstrong), we were able to take down his supplier in Georgia just across the Georgia line. He came and made a delivery, of course he thought he was going to be delivering it to someone else, but he delivered it to the DEA agents, which caused him to be arrested.

According to Harden, Armstrong was selling between 4 to 8 ounces of meth a week.

“He was picking up two to three times a week at 4 ounces at a time,” Harden said. “That’s a large amount of methamphetamine.”

This case is a good example of how a joint effort can result in lessening crime in the county, Harden said.