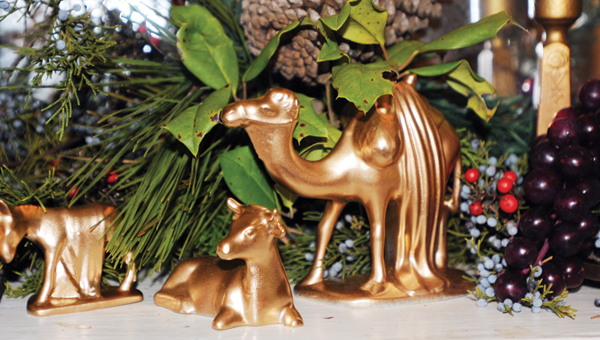 Above part of a nativity scene that is displayed on Tom Braxton’s fireplace mantle. Right above the camel is a holly branch with thorns that represent the crown of Jesus at his crucifixion. |
Tracy Salter / Advocate Staff

Elements to holiday have old origins

Christmas is less than a week away, and the signs of the season can be seen and heard everywhere you go.

Inside homes and offices, there are trees sparkling with lights and ornaments. Colorful stocking hang from mantelpieces, waiting to be filled with goodies for family members. Evergreen wreaths grace doors and windows, and candles shine through the windowpanes. Shoppers tick off items on their Christmas gift lists as festive tunes ring out over store intercoms. It’s all part of the seasonal celebration.

But how and where did these customs originate? Why do we celebrate Christ’s birthday on Dec. 25, when most Biblical scholars believe Jesus was actually born in the spring? Why do we use green and red as our traditional holiday colors? And who should be thanked for first bringing the Christmas tree to our shores? Read on to learn the answers to these questions and more.

The celebration of Christmas as we know it certainly has its origins in pagan customs going back thousands of years. In ancient Babylon, the feast devoted to the goddess Isis was held on Dec. 25. A lot of “eating, drinking and being merry,” took place, along with the giving of gifts. In Rome, many years before the birth of Christ, celebration of the Winter Solstice took place honoring their god of agriculture, Saturn.

In northern Europe, the pagans celebrated their own winter solstice, known as “Yule.” Yule was observed on the shortest day of the year, symbolic of the birth of the sun god, Mithras. It was customary to light a candle to encourage Mithras, and the much-missed sunshine, to return the next year.

There is no doubt Pope Julius I’s declaration in 350 A.D. to observe Christ’s birthday on Dec. 25 was meant to soften the blow when Roman citizens converted to Christianity (in a time when pagans were still in the majority). Even as they embraced a new religion, they could still retain some of the long-enjoyed traditions of the winter season.

‘The colors of Christmas’

Going back to the 14th century, churches presented Miracle Plays to educate a largely illiterate public on religious teachings. During the Paradise Play held each Dec. 24, they fastened apples to the branches of a pine tree to represent the Tree of Good and Evil found in the Garden of Eden. Following the church’s example, believers began assembling pine trees in their own homes and decorating them with apples.

The color green is a natural symbol for life, represented by the evergreen’s survival through the barren winter season. In Christian tradition, green came to represent the eternal life offered by Jesus Christ. Red, like the color of the apples on those long-ago Miracle Play trees, symbolizes Christ’s blood shed at his crucifixion. Evergreens that were part of pagan celebrations were incorporated into Christmas tradition. The unending circle of a wreath came to represent eternal life. The prickly edges of the holly’s green leaf stood for the thorn of crowns worn by Jesus, and its red berries for the blood He shed.

Today red and green are automatically associated as the colors of Christmas to believers and non-believers alike, inspiring warm thoughts of the season.

There is a story that tells of Saint Boniface, who cut down an oak tree being worshiped by German pagans, and replaced it with an evergreen. He told them how its triangular shape reminds us of the Trinity and emphasized that evergreens point heavenward.

Legend has it Martin Luther, the famed 16th century German Protestant reformer, was inspired one winter’s night after glimpsing the twinkling starry sky through the branches of an evergreen.  Luther, the legend says, was the first to add lighted candles to an evergreen brought indoors.

Historical fact tells us those Paradise Play trees assembled in the homes were the predecessors of our modern Christmas trees.  Over time, the red apples that originally decorated the evergreen branches were replaced with shiny red ornaments and other decorations.

Queen Victoria was delighted as a child when the German tradition of Christmas trees was introduced to the royal family. In her journal, the thirteen-year-old future monarch wrote, “There were two large tables on which were placed two trees hung with lights and sugar ornaments. All the presents being laid around the trees . . .”

When she married her German cousin, Prince Albert, the couple fully embraced the tradition of the Christmas tree with their children. Lithographs appeared showing the royal family celebrating around the tree, and an illustrated book all about Christmas trees became a best seller in the 1840s.

Soon, Christmas trees became popular in Britain among well-to-do families in the mid-19th century. As time passed, the use of trees at charity bazaars, in hospitals and at public entertainments made them increasingly popular and accessible for even the poorest to enjoy. By the mid-1920s, the use of Christmas trees as part of their holiday celebrations had spread to all classes in England.

There is some evidence the earliest Christmas trees found on American soil were actually part of a Hessian mercenary’s holiday celebration while imprisoned during the American Revolution.

Other accounts indicate German immigrants living in Pennsylvania and Massachusetts introduced the Christmas tree in the second or third decade of the 19th century.

While historians bicker over just who deserves credit for bringing the Christmas tree to the U.S., there is no doubt both its growing popularity in England, and the swell of German immigrants bringing their beloved tradition to American shores, combined to help secure a festively decorated evergreen being part and parcel of our holiday traditions on this side of the Atlantic.

There is a legend that long ago, a nobleman who had fallen on hard times, was unable to provide his three beautiful daughters with dowries. He feared he would have to turn them out on the streets. It was Christmas Eve and the three girls had washed their stockings and hung them to dry by the fireplace to distract themselves as they worried about their fate.

St. Nicholas heard of their troubles and knew the family was too proud to ask or to accept charity.

So later that night, the kindly saint quietly slipped down the chimney and put three bags of gold into the stockings. The family discovered the gold on Christmas morning, giving thanks to God for the gift that allowed the daughters to marry. Sometimes the legend is told with three gold balls, which led to these balls becoming a symbol of pawnbrokers (and St. Nicholas their patron saint).

Historical evidence indicates the roots of hanging stockings at Christmas started out with Dutch children in the 16th century. They would leave their clogs filled with straw out for Santa’s reindeer or donkey, along with a treat for Santa, hoping he would leave gifts for them in exchange.

In Clement C. Moore’s classic poem, first published anonymously in 1823, “A Visit from Saint Nicholas” we read “the stockings were hung by the chimney with care, in hopes that St. Nicholas would soon be there.”

Today, adults, children and pets alike often have personalized stockings waiting to be filled with goodies by Santa — or one of his helpers. And we still leave out reindeer food and milk and cookies for Santa.

‘The sounds of the season’

Given Christmas’s history, you won’t likely be surprised to learn the earliest carols were actually pagan songs sung at those Winter  Solstice celebrations as they danced around rings of stones (the word “carol” actually can refer to both a circular dance and a song of joy).

Carols used to be created and sung for all four seasons, but only the tradition of singing them at Christmastime has survived.

As early as 129 A.D., a carol known as “The Angel’s Hymn” was sung at a Christmas celebration in Rome, but the majority of early Christmas carols have been lost in time. During St. Francis of Assisi’s living nativity plays in the 13th century, songs were sung in the native tongue of the people rather than solely in Latin, a tradition that spread throughout Europe.

By the 15th century, most Christmas songs were only loosely based on the nativity story, telling about the holy family meeting different people in Bethlehem. These carols were sung in homes rather than churches. Traveling minstrels adopted these songs and changed the words for the local people wherever they journeyed.

The Puritans under Oliver Cromwell tried to abolish Christmas celebrations altogether in the 17th century. Even after the Restoration, caroling largely fell out of favor until Victorian times. Many choirs and orchestras were then being established in cities across England, and they wanted Christmas carols to sing. New carol services were created, and the tradition of caroling in the streets also began. Many of the carols we sing today were written in Victorian times.

Today, through school and community productions, church cantatas and other seasonal musical events, Christmas carols, both secular and sacred, are very much alive and well.