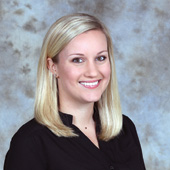 Eason comes to Greenville from Macon, Ga., where she served as a landscape designer and event planner. She is replacing Laura Sadowski, who will be leaving the chamber at the end of the year to move with her husband, Ethan, to Birmingham. Sadowski’s husband is pursuing a degree in dentistry at UAB.

Eason’s husband, Ken, grew up in a small town near Savannah, Ga., called Claxton, Ga., and the prospect of living and working in a smaller place was too good to pass up.

“He loved growing up in Claxton and so when the opportunity for us to secure a job here, we knew it would be a good place where we want to raise a family some day in the future,” she said.
While her background is mainly in landscape architecture, Eason’s first job out of college dealt with her major to some degree, but it involved some event planning, she said.

“I think this job ties nicely with event planning,” she said. “We did a lot of weddings, Christmas parties and decorations, and planning events from start to finish. This is my first job with the bookkeeping aspect.”

Eason graduated from the University of Georgia in 2011 and lived in Atlanta, Ga., until she got married.

“I’m happy to be out of Atlanta,” she said. “It was a fun experience. I’m glad I did it. I learned a lot, but it made me realize that I want to be in a much smaller place. The transition has been wonderful.

“Everyone’s been very welcoming here,” she said about the folks in Greenville. “Through this job at the chamber, I’ve already met a lot of people, and I’m able to get plugged in to the town right away.”
Eason said people have gone out of their way to make them feel welcome.

Eason has already spent time learning under Sadowski at the chamber, and said that she has some “fresh ideas” for town events.

“I’m real lucky I get to learn under Laura,” Eason said. “She does such a good job already. She’s leaving big shoes to fill, and I think some of the events that I’ve done and the experience living and working in Macon and Atlanta; I think I’ll be able to bring some fresh ideas to some of the town events and the way things are done.”

Eason’s husband works as the district manager at Resource Management Services. Lacey said Ken has made a lot of good contacts since starting to work there.

“He’s excited because this is a great place for him to do what he does,” Lacey said. “There’s a lot of land. Everyone’s been extremely welcoming across the board.”

With the chamber office as an old train depot, hearing the trains go by on a frequent basis is nothing new for the new administrative assistant because she grew up riding horses near a set of train tracks.

Lacey is the daughter of Tom and Pam Gibbons of Macon, Ga., and Ken is the son of Tim and Teresa Eason of Claxton, Ga.

A set of weights was the center of an argument that got physical between two Greenville brothers on Saturday afternoon.... read more