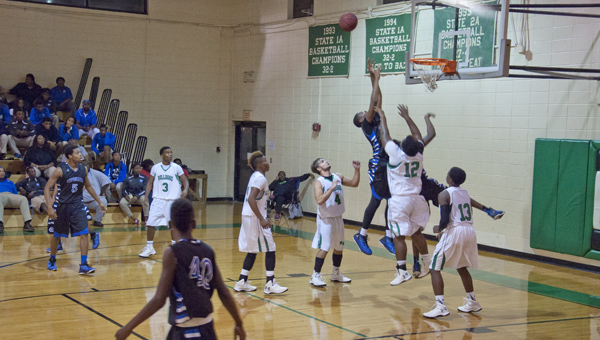 Georgiana High School continued a successful season with a win against longtime rivals Brantley High School Thursday night, 68-41. The Panthers are now 8-1 for the season.

“Winning in Brantley is always a big deal,” said Georgiana head coach Kirk Norris. “They are one of our biggest basketball rivals, no doubt.”

Brantley head coach Andrew Kilcrease said it was a night of struggles for the Bulldogs.

“We struggled with rebounds. We struggled at the freethrow line,” he said. “Right now, we’re slow getting in the basket.”

One Bulldog managed to find the basket. Darain Jones led the team with 22 points, 21 of which came in the second half.

“We hope we can adjust and maybe win the game,” Kilcrease said.

The Panthers had an uphill battle with two starters out for the night. Point guard and leading scorer Jacquez Payton and shooting guard Devin McMeans had injuries that kept them out of the game. Norris said both were expected to return by next week.

To make up for Georgiana’s shallow bench, Norris pulled up three players from the b team. Ja’Michael Stallworth, Deaarion Square and Clarence Curry rotated into Thursday’s lineup.

“All three of them did well,” Norris said. “They played with composure in a big rival game. I’m proud of them.”

The Tigers got off to an early start thanks to Richard Boggan. The power forward put up seven of the team’s 10 points in the first quarter. He finished the night with 27 points.

“He’s a really physical guy,” Norris said. “He did a really great job for us establishing his position in the paint.”

Kilcrease said the team played well as a whole.

“They did a good job of sharing the basketball,” he said. “We had talked about good team-playing and sharing the ball and tonight it went well.”