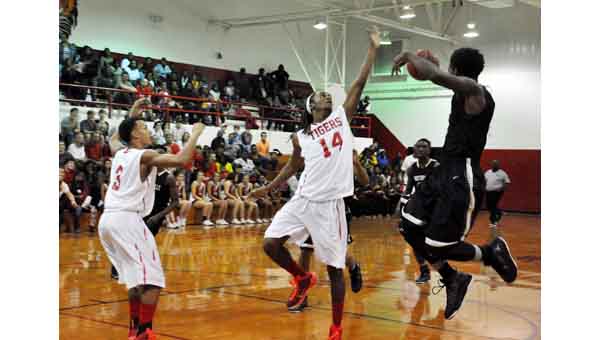 As two Tigers teams took the floor Friday night, only one had its claws out. The Greenville Tigers defeated the Luverne Tigers, 78-53.

“Luverne is a great team,” said Greenville head coach Kelvin Lett. “We just made the shots we needed when we needed them.”

Just three games into the season, Lett said his team has not reached its potential.

“Hopefully, we can get rid of these football legs and get basketball legs. For now, we’ll take a win any way we can get it,” he said.

Greenville has done just that. They are 3-0 for the season.

When Greenville takes on Central Saturday night, Lett said he hoped to see fewer turnovers than he saw against Luverne. He did acknowledge some improvements in the team’s 3-1 defense.

“We still have a long way to go, but we’re getting better,” he said.

The girls game had fans on their feet as the teams battled in overtime. Despite losing their point guard to a sprained ankle in the first half, the Luverne Lady Tigers ultimately won the game, 46-44.

Leading scorers were Alexus Redmon with 13 points and Nyjah Thomas with 18 points.

“The score never swung more than five points on either side,” he said. “We were behind by five at the end of the first half, but the girls never gave up. I’m really proud that we were competitive to the end.”

The Lady Tigers started this week with a 34-31 loss at Red Level Monday night.

Luverne will spend the rest of the week playing in Goshen’s Christmas tournament.

By SEAN HOLOHAN Troy Messenger The Luverne girls basketball team beat Goshen Tuesday, 47-32. After getting on the board first,... read more