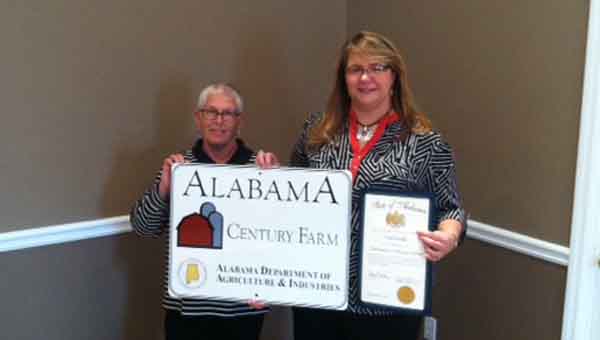 Salsoda Farm was recognized as an Alabama Century Farm during this year’s Farm-City luncheon at Luverne Church of Christ. The farm has been owned and operated by the same family for more than 100 years.

The recognition was bestowed on behalf of Commissioner John McMillan and the Alabama Department of Agriculture and Industries.

“Since the Century and Heritage Farm program began in 1976, the department has recognized over 550 farms in Alabama. In the past, only 13 other farms in Crenshaw County have been recognized as a Century and/or Heritage Farm,” said Amy Belcher, communications director of the Alabama Department of Agriculture and Industries.

Belcher shared the history of the farm during her presentation. In 1887, Philip Greenwood and Nancy Louisa Harbin purchased the first property that is now known as Salsoda. Greenwood was the postmaster and Harbin was the assistant postmaster.

“They had seven children, one of whom was Samuel Walton Harbin. Samuel’s daughter, Mary Ann Harbin Faber and her husband, Shepard, own the farm today where they grow timber,” Belcher said.

In the past, the family has also grown cotton and corn and raised cattle on the farm.