Flying Squadron heads to Goshen after loss to Brantley 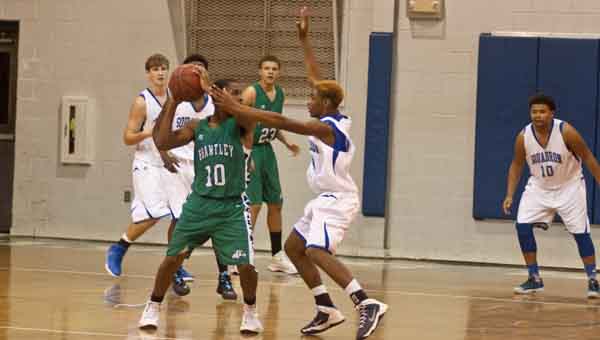 The Flying Squadron will head to Goshen tonight and winning the game will require holding down a few key players on the Eagles roster.

“They have four very good guards and they run them in and out of the game,” said head coach Joe Proctor.

Highland Home took on Brantley Monday night. The team took an early lead in the first quarter. La Destin Poole’s and Will Smith’s 3-pointers contributed to a 10-8 score. The two-point lead disappeared in the second quarter as Brantley’s DaRion Jones put up nine points, six of them at the free-throw line. The Bulldogs were up 24-17 by the end of the quarter.

Brantley put some distance between them and the Squadron in the third quarter and entered the fourth with a 36-28 lead.

Jones was the biggest factor in the Bulldog’s first game of the season. The senior earned 30 of the team’s 51 points.

The final score was 51-45 Brantley. Head coach Andrew Kilcrease said he was pleased with his team’s efforts.

“Overall, they played very hard and that’s pretty much what I ask of them,” he said.

Lead scorers for Highland Home were Smith with 12, Poole with 10 and Tay Fuller with nine points.

“Tay is veteran guard. He’s been with the program for three years and he knows all of the fundamentals,” Proctor said after Monday’s game. “Smith is the only other veteran player. He played well tonight.”

The game was the Squadron’s third of the season. They participated in a Thanksgiving tournament at Georgiana last week.

Proctor said the majority of his players had never played organized basketball and he could tell they were catching on to his style of play.

“I’m just looking forward to cutting down our turnovers and blending well as a team,” he added.