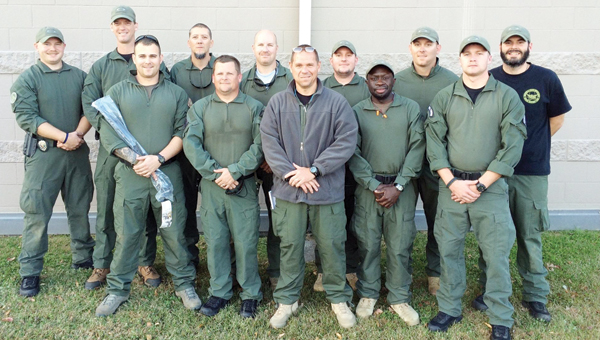 All of the hard work and training paid off for Greenville Police Department’s Special Response Team (SRT) last week at the Alabama Tactical Officers Association State S.W.A.T. competition in Columbiana.

The local SRT team, which is comprised of 12 men from the GPD and Drug Task Force, claimed first place, beating out much bigger departments by a wide margin, in the annual conference’s competition portion.

“We’re very proud of them,” GPD Chief Lonzo Ingram said. “The thing about this is that even though it’s a competition, it’s a training session.”

SRT finished with 30 points for the win, topping other teams from Tuscaloosa, Lee County, Limeston County, Florence and Shelby County. In all, nine teams competed.

“It was like a 1A school playing up against a 6A school,” GPD Capt. Randall Courtney said at the City of Greenville’s council meeting Monday night.

Last year, the SRT team finished tied with the Decatur Police Department’s SWAT team for the second-best score, but settled for third after the tiebreaker gave the advantage to Decatur.

Greenville’s SRT is a group of highly trained officers that respond to hostage and barricade situations. They also do the first entry on buildings under search.

This year’s competition included a lot of running and shooting, along with even trying to get out of a hostage situation.

“It included tactical training as well,” GPD Lt. and team leader Justin Lovvorn said. “We had three different events that we competed in. All teams competed in the same events, just at different times. It was whoever had the best scores.”

Lovvorn said those who competed can’t remember a team winning by such a large amount.

“We actually scored four points higher than the closest team to us, which is what they call ‘running away with it up there,’” he said. “Normally, they are decided by a fraction of a point, or by tiebreakers. This is the first year that it wasn’t even close.”

Lovvorn said without Courtney putting the team through a rigorous training regimine, then the team wouldn’t have finished as well as it did.

“He puts us through it,” Lovvorn said. “Every training day he works us hard and it showed this year. We won third last year, and we’ve been improving every time we go.

“This year, we were finally able to take it all,” he said.

Lovvorn said another factor that helped in the win is that each team member could do any challenge presented.

“The whole team should be recognized,” he said. “We had different ones who entered different events. We all have done the same training. Any one of us on the team can swap out with another. We’ve really got a very equal team.

“Captain Courtney and I are confident we have the right men to fill any position with somebody,” he said. “We’ve just got a real well-rounded team.”

The Butler County Sheriff’s Department is investigating a shooting that has left one person dead and one person in critical... read more