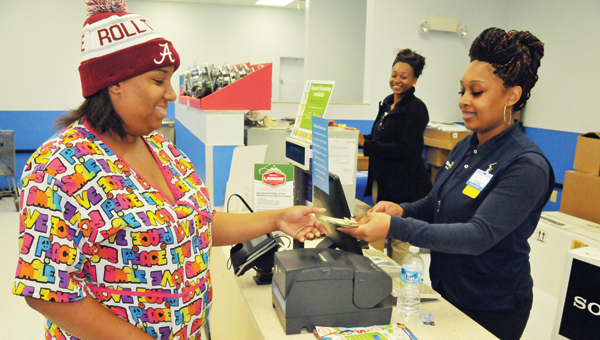 Thanksgiving Day is becoming Black Friday: Part One or “Black Thursday” for many retailers and shoppers.

According to the National Retail Federation, spending on Black Friday weekend in 2013 totaled $57.4 billion in the U.S.

It’s estimated that 44.8 million of the 140 million shoppers from last year’s Black Friday weekend shopped on Thursday, up 27 percent from the previous year. That seems to be a big enough incentive for merchants to expand their hours and offer great deals, and that’s just what some are doing.

Last year, several major retailers, including Macy’s, J.C. Penney and Walmart, all opened on Thanksgiving. More stores have joined that list this year, with some of the stores opening even earlier this Thanksgiving than last year. Just a couple of years ago, J.C. Penney was closed on Thursday and offered no traditional Black Friday deals.

However, this year the retailer is opening at 5 p.m. Thanksgiving Day, three hours earlier than last year. Walmart will be open around the clock, but the Black Friday specials don’t go “live” tomorrow until 6 p.m.

Goody’s will be opening at 4 p.m. Thanksgiving Day and will remain open until 1 a.m. Friday, for what is described as their “biggest ever Thanksgiving event” by parent company, Stage Stores, Inc.

“We are absolutely thrilled to open our stores at 4 p.m. Thanksgiving Day. We know our customers are eager to get started on their holiday shopping and find the best deals available,” Michael Glazer, President and CEO of Stage Stores, Inc. said.

‘Everyone deserves to be with family’

All consumers aren’t jumping on the Gray Thursday bandwagon. When several local residents were polled for their opinion on stores opening on Thanksgiving, the response was largely a negative one.

“I think it’s wrong for stores to open at all on Thanksgiving, and they should close by 4 p.m. Christmas Eve. If they ain’t got it by then, they don’t need it,” said Sherry Henderson. “I’ve worked retail during the holidays before so I speak from experience. Everyone deserves to be with family on special holidays.”

“All stores and dining establishments should be closed on Thanksgiving,” she said. “I will not be shopping on Thursday or on Black Friday,” said Logsdon. “This is a holiday that should be set aside for families to gather together.”

Family is the reason Liza Berry doesn’t plan to shop on Thanksgiving. She’ll be spending it with her loved ones at home rather than the shopping mall or big box stores.

Helena Shirley thinks Black Friday shopping can be a “lot of fun,” but says she will opt out of doing any browsing on Thursday.

“I am opposed to stores being open on Thanksgiving,” she said.

While Kristi Williams doesn’t plan to shop on Thanksgiving Day, preferring to spend it with family, she does point out that some employees are grateful for the extra pay generated by working on a holiday.

“I am not being a Scrooge, but that money is important to a lot of people,” Williams stressed.

Other local citizens say they enjoy getting together with close friends and family members and making a fun evening of shopping that offers togetherness—albeit in a retail store instead the family den.

Toys “R” Us is considered the first major retailer to open on Thanksgiving, starting in 2011.

At that time, few retailers even entertained the notion of starting Black Friday deals on the holiday itself.

“People are taking time to think about it now,” Rich said. “When people think about Black Thursday and the whole idea of consumerism versus Thanksgiving, it leaves a pretty bad taste in their mouths.”

All retailers are not beating the drum for Black Thursday, either. National retailers who are remaining closed on Thanksgiving include GameStop, Lowe’s, Ace Hardware, Dollar Tree, Home Depot, Cabela’s and Dillard’s.

Some of these retailers say it is not about the dollars they won’t bring in by remaining closed; it’s about their employees being able to enjoy the holiday with friends and family.

However, with more and more retailers fiercely competing for their part of the financial pie, it doesn’t look as if Thanksgiving Day shopping will be going away soon.

That thought leaves Henderson with a bad taste in her mouth.

“I am old enough to remember when stores closed Sundays and holidays. Now it’s all about the all-mighty dollar.”

Advocate staff / Andrew garnerGreenville junior Mary Margaret Lecoq was selected as the only saxophonist to play in the 2015... read more