Brantley loses in third round of playoffs 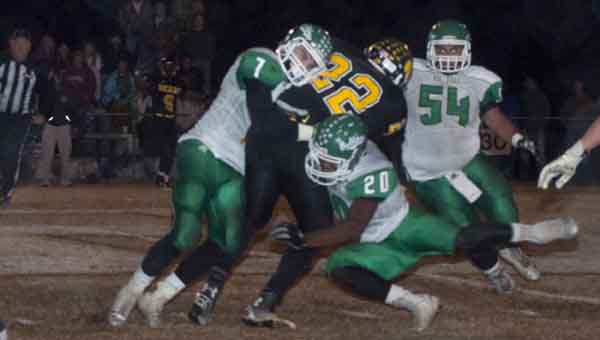 Bulldogs Brandon Walker (7), Doug Salter Jr. (22) and Bryan James take down a Bear during Friday’s game. Billingsley beat Brantley 14-20 in the third round of the playoffs. JOURNAL PHOTO | MONA MOORE

The fact that the Bears have never beaten the Bulldogs was completely irrelevant to the packed crowd that lined every available portion of Mims Field on Friday night and stood with signs, artificial noise makers, and anything else they thought might could will their team to victory. When the clock turned to zero, the fans and players got exactly what they all hoped and believed might happen, a Billingsley win 20-14.

The Bulldogs (12-1) received the opening kickoff and set up their first drive at their own thirty-nine yard line. Facing a third and fifteen at their own forty-five the Bears defense looked poised to force Brantley to a three and out, but Bulldogs quarterback Jacob Free would find Kaisaun Nichols down the right side for forty-seven yards to set the Bulldogs up with a first and goal at the Billingsley (10-2) eight yard line. One play later and Jermany Salter would go in from eight yards out to put the Bulldogs up 7-0.

After an early first down on their ensuing drive the Bears would be forced to punt from their own nineteen.

The Bulldogs would start their second drive of the night from the Bears 41. This time, the Bulldog drive stalled at the Bears 20 where a field goal attempt by Tanner Spivey would sail wide to the left.

Starting at their own 20-yard line, the Bears would turn to the ground game. Billingsley would ride the legs of Derrick Dunnigan all the way down to the Brantley 34 where Jaytarius Steel took the hand off from Thomas Nichols and went 34 yards for the score.

With the two-point conversion no good, the Bulldogs maintained a 7-6 lead early in the second quarter.

The ensuing Bulldogs drive looked poised to stall at the Bears 25 were they faced a fourth and 15, but Free would find Brandon Walker for a 25 yard touchdown pass to put Brantley up 14-6 with 7:02 left in the first half.

A Billingsley fumble at their own 39 set the Bulldogs up with a first and goal, but the Bears defense would stand tall and force a three and out.

Taking over with 4:05 left in the second quarter, the Bears took over at their own 21. Facing a fourth and seven from the Brantley 10, Nichols was flushed from the pocket and went 10 yards for the touchdown. With Steele adding the two-point conversion, the teams went to the locker room all tied at 14 a piece.

The Bulldogs got the second half started and would drive to the Bears 26 yard line where a Brantley fumble would bounce into the hands of a Billingsley defender to set the Bears up first and goal at their own 26 yard line.

With Nichols sidelined after an arm injury late in the first half, Dalton Davis took over as quarterback for the Bears and led a 74-yard scoring drive that would end on a Dunnigan three-yard touchdown run to bring the score to 20-14.

The ensuing Brantley possession would stall at the Bears thirty-nine yard line and after a Bulldogs punt, Billingsley would take over first and ten at their own 25 with 8:51 to play.

Rashaud Caver led the Bears offense out to midfield where a third and 10 play would come up short and they would be forced to punt the ball over to the Bulldogs who would take over at their own 29 with 5:46 to play.

With a third and 11 from the Billingsley 43, Kaisaun Nichols took the handoff and coughed up the ball, which was smothered by the Bears defense.

With 3:22 to play, Billingsley took possession at their own 34.

The Bears, unable to get anything going with the possession were forced to punt the ball away.

With 3:06 on the clock and out of timeouts, the Bulldogs took over at their own 24 yard line.

Two incompletions, a stop by Caver, and a sack by the Bears defense would turn the ball over to their offense.

With just 1:44 to play and with the Bulldogs unable to stop the clock, three kneels by Dalton gave the Bears the win and the right to a re-match next week with Maplesville.

“Our kids played hard, they done what we told them to during the week and we made a play when we needed to make a play,” said Billingsley Coach Tyson McLean, “All the credit goes to our kids, they came out and played their tails off.”

Free threw for 164 yards on 15 of 29 passing with one touchdown for Brantley. Doug Salter led the Bulldogs ground game with 50 yards on nine carries.