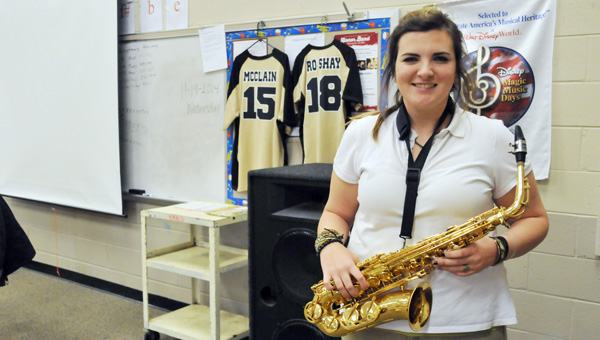 A vision of a man playing the saxophone on a dimly-lit street corner popped into Greenville junior Mary Margaret Lecoq’s head when she was deciding which instrument she was going to play in band.

From that moment in fifth grade, Lecoq knew she was going to play the saxophone. Her time since then playing the sea horse-shaped instrument has been productive as she was recently selected to play the alto saxophone in the 2015 Alabama All-State Sinfonia Orchestra.

“It’s pretty neat,” Lecoq said about receiving the honor. “I’m incredibly excited about it. When I found out, I had checked my email that day and I freaked out for maybe 3 or 4 minutes straight.”

Lecoq will join the other members of the orchestra for the All-State Festival next February.

In October, Lecoq traveled to Mobile, where she auditioned for the orchestra. The experience, she said, was a lot different than trying out for the All-State band, which she has been doing for years.

“My friend and I were warming up together, and they called us into the audition room,” she said. “We went in and this woman — it wasn’t a blind audition like I was used to. There were tape recorders.”
Lecoq played excerpts from French composer Georges Bizet’s L’Arlesienne Suite No. 1.

From there, the tapes were sent off and Lecoq started the agonizing wait to find out if she had made it into the orchestra. She found out the audition results on Nov. 17.

“With everything going on at school, I just tried to forget about it so I could still function,” she said about the wait. “When it came out, the week of, we were all just freaking out waiting on it to come in. We were all just like that’s all we can think about. It was a long wait.”

Auditioning for All-State was nothing new for the GHS student. Lecoq has been auditioning for the All-State band since she was in sixth grade. She’s made the district band every year and All-State twice, once each in the seventh and 10th grades.

Lecoq is the first Butler County student to make it to the All-State orchestra.

“He’s been very supportive,” Rose, Mary Margaret’s mom, said about Pryor. “We are not a musical family.”

Lecoq said it was the best decision for her to pick up a musical instrument.

“I just remember having that really cool image of a jazz guy playing in the street,” she said. “I thought I want to do that. That would be cool. Then, I got a really good score on the instrument test.”

After high school, Lecoq said it’s a dream of hers to attend and study music at the prestigious Juliard School in New York City, or at Eastman College at the University of Rochester, also in New York.

Additionally, Lecoq is the drum major at GHS.