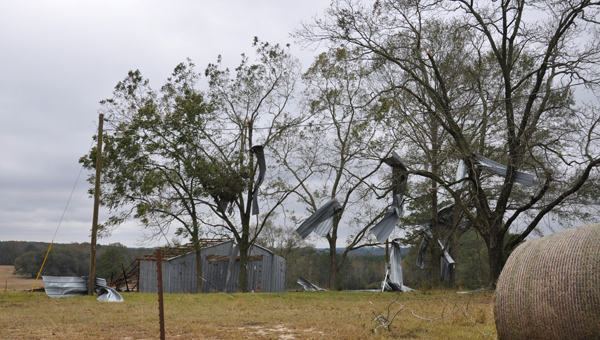 Tin from a barn on Live Oak Road litters trees and fields. Some of the tin was found 100 yards from the site.
JOURNAL PHOTO | MONA MOORE

Wyatt Pippin was stirred awake by the sounds of tornado warning alarms and shingles flying from his rooftop.

Other than a leaking roof and the messy yard, Wyatt’s home survived the EF-1 tornado that blew through Crenshaw County at about 4 Monday morning and left 1,100 homes without power.

“It knocked out eight light polls and six were the three-phase ones,” said Chellie Phillips, head of marketing and communications for South Alabama Electric Cooperative.

“There was pretty extensive damage to certain areas of the county – seven or eight destroyed chicken houses and damage to family homes,” Thompson said.

An EF1 tornado has winds of 95 miles per hour. This tornado’s damage path was 16 miles long.

Thompson said to expect more of the same this weekend.

“Another round of bad weather is possible this weekend. I will be participating in a webinar with the NWS tomorrow at 11am and as soon as I get more accurate information, I will pass it on,” he said.

As quickly as the tornado came, it was gone in a flash, said Live Oak Road resident Debra Pippin. She and her family lost three chicken houses.

“The houses are gone, barns are all gone,” she said. “As bad as it was, we’re thankful because nobody was hurt.”