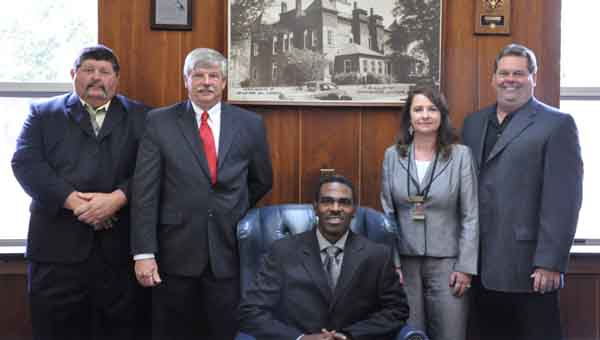 “I nominate Charles Sankey because of his experience,” McElwain told the commission. “He’s going into his fourth term and I think he’s proved himself.”

Sankey was elected with a 3-2 vote. Commissioners Michelle Stephens (District 2) and Merrill Sport (District 3) voted against it. Sport was appointed vice chairman.

Sankey thanked McElwain for the nomination and for McElwain’s work as chairman of the commission for the last four years.

“We’ve got a great commission and hopefully we can continue to work on some issues,” he said.

The commission reappointed Levi Nichols as county attorney and chose to keep accounts at the banks they currently use, which are First Citizens, Brantley Bank and Trust and First National Bank of Dozier.

Sankey asked Nichols if it would be a violation of the Sunshine Law for three commissioners to meet outside of a regularly scheduled meeting. He said he wanted a few of the commissioners to meet with members of Crenshaw Animal Society and officials from Luverne, Dozier, Rutledge and Brantley in order to come up with a plan to deal with the county’s animal control.

Nichols said three commissioners would be a quorum and would require public notice and open meetings. Sankey said he was not against an open meeting, but felt it would be difficult to schedule in advance because of the work schedules of commissioners.

Sankey asked if there were two commissioners willing to head up an animal control committee. Sport suggested McElwain and Chris West (District 4) because he planned to take part in the committee on the behalf of CAS, where he is an active member.

Sankey said Sport’s ties to CAS would make him an appropriate representative for the commission.

“We also want somebody that can work with them. We need someone who knows both sides of the issue,” he said.

“We’ve got four more years of work,” said Sankey. “I just ask that all of us work together. That’s the way it’s been … that’s the way it needs to be.”