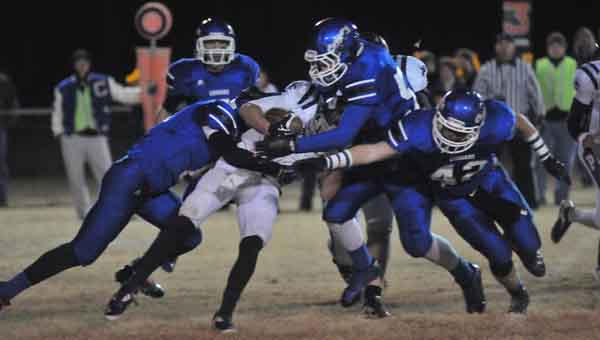 Cougars take down a Patrician Saint during Friday’s game.
JOURNAL PHOTO | A. GARNER

Crenshaw Christian Academy wasn’t going to give up easily on Friday night.

The Cougars scored two touchdowns in less than 30 seconds to cut the game to three points, but ended up falling 26-16 in a heart breaker to Patrician Academy in the semifinals of the Alabama Independent School Association state playoffs.

“It was a good season,” CCA first-year coach Greg Gibson said. “I wanted to get them to Troy. They felt like they’ve over achieved and thank goodness I don’t. I don’t feel like they have.”

Longing for a shot at playing for the championship, the Cougars found themselves behind 19-0. However, CCA wasn’t about to go down without a fight.

Early in the fourth quarter, the Saints ate up some clock, despite CCA handing it to them on defense.

PA punted the ball away, where the ball landed on the CCA 30-yard line.

Led by junior quarterback Colten Kelley, the Cougars marched the field 70 yards in six plays, where Kelley found sophomore receiver Brandon White for a 1-yard touchdown reception with 5:10 to go in the fourth quarter. Dalton Weeks went around the right end for the 2-point conversion and the Luverne private school trailed 19-8.

With the onside kick coming, CCA receiver Logan Johnson managed to grab the ball and get the momentum going back toward the good guys.

Kelley didn’t take long to strike as he connected with Weeks for a 43-yard TD catch with 4:56 left in the game. Weeks took the 2-point in again from the right side and all-of-a-sudden, it was a new ball game at 19-16.

The Cougars’ defense stepped up to force a Saints punt, but the offense went three and out as they started all the way back up to their own 20.

“We got the ball back trailing 19-16, but the only problem was it was 80 yards down the field,” Gibson said.

It took Patrician two plays to go ahead for the eventual game-winning score. Tristan Weatherly, a junior, ran the ball in from 3 yards with 1:26 left in the game to give the Saints a 26-16 lead.

The Cougars almost got a first down on their next possession, but turned the ball over on downs, thus ending a well-played season.

Early in the first quarter, CCA suffered a huge loss when running back Jamal Saunders, a foreign exchange student whose main sport is basketball, went down with an injury. Saunders didn’t return to the game.

Gibson said the game plan changed after Saunders was carted off the field.

“We had to adapt,” the coach said. “It kind of threw us for a loop. Definitely, when a kid goes down like that, it changes everything, but they stayed in there and clawed and fought. To be honest with you, it should’ve been 6-0 at the half. We really shouldn’t have been down at the half.

“Hey, when you make plays like that, that’s what happens to you,” he said. “You lose. It’s a lesson to be learned.”

Patrician didn’t score its first touchdown until the second quarter. Junior running back Kaleb Sessions ran the ball in from 9 yards with 3:15 to go in the first half. The Saints went up 12-0 with 30.3 seconds left before halftime on a 2-yard TD rush from senior running back Devin Black.

The Saints held the Cougars to a three and out to start the third, and went up by 19 after Kelley through an interception at the 6:40 mark.

From there, Sessions took it 69 yards to the house one pay later with 4:20 left in the third quarter.

On Patrician’s next offensive possession, the Cougars’ defense held the Saints at bay and forced a punt on a fourth and 23 play.

On the ensuing punt, Preston Worley made a good block for CCA to give the Cougars good field position.

Collin Holloway led CCA with 10 tackles. Matthew Flint had eight tackles; and Hunter Weeks and White had six each.

Most of the first quarter was spent throwing the ball for the Cougars.

Gibson said one of the main cruxes of the game was the inability to run the ball.

“You can’t win any football games if you aren’t running it a lick,” he said. “I bet you we had 20 yards rushing all night and that was by the quarterback for two to three plays.”

In the end, though, Gibson said the boys hung in there.

“They stayed in there long enough to give themselves a chance,” he said.

Fortunately for CCA, the Cougars have a lot of players coming back to the gridiron next season. Many of them are skill players.

“Three of them included on the offensive line,” Gibson said.

Gibson said the boys came a long way since the start of the season.

“Nobody thought these kids were going to be in this game,” he said. “They were 2-8 last year. They lost a pile of seniors. They got here and it hurts because they got this dad-gum close and didn’t finish it. Whereas, if they had finished 6-4 and didn’t make the playoffs; won their 10th game, the kids would feel pretty good about it.

“They had a chance to win it in the end,” he said.

Crenshaw Christian finished its season with a 8-4 record.