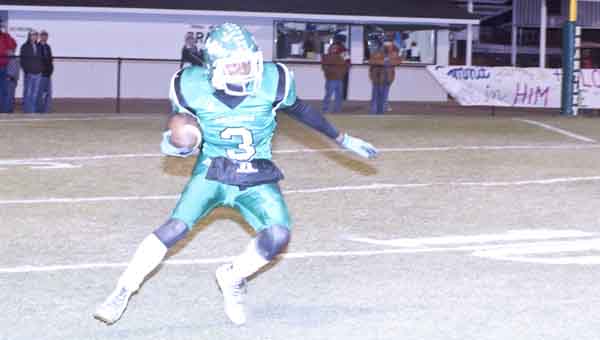 Frank Harris plots his course as he picks up a few yards against Linden Friday night.
JOURNAL PHOTO | MONA MOORE

The Brantley Bulldogs will continue their trek to Tuscaloosa with a stop in Billingsley Friday night.

“They’ll be tough,” said Brantley head coach Ashley Kilcrease. “But, we like our odds.”

Billingsley beat Ellwood Christian 72-12 to move on to the quarterfinals, and the Bears were 5-0 in their region and 8-2 overall. The Bears also coasted through the first round of the playoffs with a 42-14 win over Kinston.

The undefeated Bulldogs ended Linden High School’s quest for a title with a 20-12 win last Friday.

The Patriots left David Lowery Stadium with their heads held high after giving the Bulldogs a run for their money.

“Our guys left it all on the field,” said Linden head coach Andro Williams.

In the game last week, the first score came from Brantley, with three minutes left in the first quarter. The Bulldogs lost momentum in the second quarter, after the Patriots stripped the ball from them on a fumble.

The tide turned again when Brantley freshman Nathan Renfroe intercepted a pass on the 50-yard line and ran the ball to the Patriots’ 7-yard line. Brandon Walker ran it in for Brantley’s second touchdown. A field goal brought the score to 13-0.

Sophomore Charles Blackmon put some points on the board with an 81-yard touchdown run with just 1:04 left in the second quarter and the Patriots went to halftime trailing the Bulldogs 13-6.

“We played well early then they got the momentum,” said Kilcrease. “But that was a big swing when we blocked the extra point.”

Linden kept up the pressure in the third quarter. After five first downs, Scott found his way to the end zone with a 20-yard TD run. The attempted 2-point conversion was no good.

Late in the third quarter, Brantley was third and 10 on its 29. Henry Lee pushed Brantley quarterback Jacob Free back to the 7-yard-line, causing the Bulldogs to have to kick the ball on fourth down. But, Linden could not turn the break into a touchdown.

At the top of the fourth, Linden got within two yards of the goal, but could not get past the Brantley defense. The team opted to kick the ball, but got a 10-yard penalty for a delay of game.

Momentum turned in Brantley’s favor in the fourth quarter when Riley Jobin intercepted a pass and carried the ball 60 yards closer to the end zone.

With three minutes left in the game, Brantley added a third touchdown to the tally. The kick was good, bringing the score to 20-12.

“We found a way,” Kilcrease said. “That last touchdown pass was just inches from going the other way and we were blessed it went our way.”

A penalty and two sacks kept the Patriots from making any progress with the ball. The sacks were both the work of Xavious Coleman.

Brantley then gained possession and ran out the clock.

Brandon Walker had three receptions for 83 yards and two touchdowns. He had eight carries for 37 yards rushing. On the defensive side of the ball, Walker had seven tackles. Doug Salter had him beat with eight tackles.

Kilcrease praised Darian Jones for a crucial play he made. “That would’ve been a touchdown if you didn’t make that block,” he told Jones after the game.

Jones had four catches for 40 yards and an interception.

Williams said he hated to see the season end the way it did.

Kilcrease said Brantley has had a great playoff rivalry with Linden. Friday was the fifth time the teams met in playoffs and the third time Brantley came out on top.

“Coach Williams does an outstanding job with his team and I have nothing but respect for him,” Kilcrease said. “He’s the type of guy you want your son to play for.”

Williams said he was pleased with what he saw from his Patriots.

“I’m proud of their effort, not only tonight, but all season,” he said.

The Patriots finished 7-3 for the season, 5-1 in their region. They beat Chickasaw High School 42-0 in the first round.

SUBMITTED PHOTOSNOTE: The evidence photos do not include locations and are not necessarily taken in Brantley. All of the photos... read more