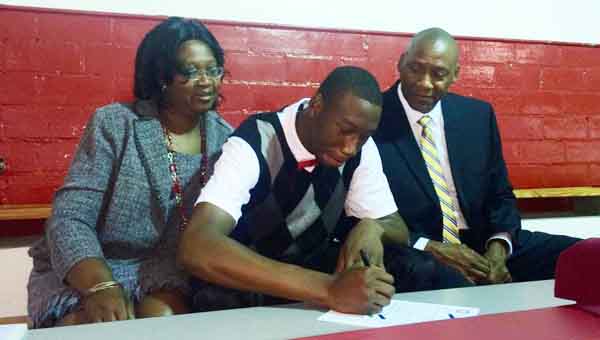 The 6’9” point guard and center committed to the school early in his high school career. His mother, Mary Hall, said the University of Alabama was his first choice.

“We always have been Alabama fans, but it was his choice and I’m just glad that he made it this far. I told him, ‘As long as you put God first, everything else will fall in place.’ I just thank God that it did,” she said. “I wish his dad had been here.”

Donta’ lost his father, Donald, when he was 13.

Luverne Coach Richard Dorsey said he was excited for Donta’

“He’s just started a new chapter of his life. If his dad was around, I know he’d be proud as of Donta’ as I and the whole community is,” Dorsey said.

Dorsey said Donta’ has been an asset to his team. Although Donta’ is quiet, he has always led the team by example.

“His presence adds everything to the team,” Dorsey said. His energy, his work habits, the way he loves the game … other players feed off what he does and how he does it.”