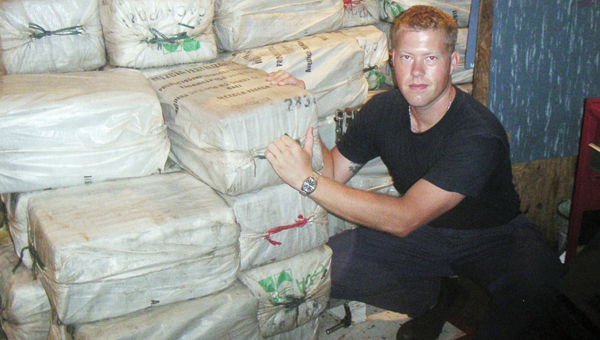 It’s the middle of the night and Jessie Pitts is right where he belongs.

The Georgiana native boards a vessel as a part of an eight-man U.S. Coast Guard Special Forces unit, kicks down a door and quickly apprehends the bad guys while seizing a massive amount of drugs.

This was the life of Pitts for four of his six years in the coast guard. He was honorably discharged in January 2010.

Pitts, along with many others, will be celebrating other veterans for Veterans Day on Tuesday.

“I work in (Veterans Affairs) hospital in San Diego,” Pitts said. “I do a lot of (post traumatic stress disorder) research with US Marines. Every time I get to work with these young men and women (who are experiencing a lot of ailments), I realize how lucky I am because many of those things could’ve happened to me.

“The truth is that the military changes all of us,’’ he said. “It changes some of us more than others. To me, Veterans Day is a day to look around at all of the veterans who are still with us, and thank them for their service, and maybe even look for ways to try to help them. So many of them need help.”

Pitts grew up in Georgiana and graduated from Georgiana High School in 2000. He went to Auburn University, where he studied for three years before dropping out to join the Coast Guard.

In 2004, Pitts enlisted and went straight to boot camp. After boot camp, he ended up in South Beach, Miami, Fla., on a cutter (ship) for one year.

“I floated around the Caribbean, and we picked up a lot of Haitian, Dominican and Cuban migrants who were trying to sneak into Florida,” he said. “We repatriated them back to their individual country of origin.”

Approximately a year after working in Miami, Pitts volunteered to go fight in Iraq. He reported to one of six small coast guard ships in the Persian Gulf and remained there for 12 months.

Pitts said they patrolled the coast of Iraq and up the main river in the battle-worn country. While there, he did counter piracy boardings to look for Arabic pirates who were trying to rob oil tankers. He also boarded Iraqi and Iranian fishing vessels in search of weapons and explosives which were being ferried to insurgents in Iraq.

Then, the real fun began for Pitts as he transferred to San Diego to the coast guard’s special forces unit called the Pacific Tactical Law Enforcement Team. He ended up on an eight-man SWAT team and was trained to sneak on board vessels in the middle of the night, kicking in doors and putting hand cuffs on everybody while finding massive amounts of cocaine.

Pitts said during his four years in the unit, he’s “put his hands on” 10 metric  tons of cocaine.

“Close to another 10 tons sank to the bottom of the ocean on different raids that we did,” he said, adding that they tried to get as much as they could for the Drug Enforcement Administration, but sometimes ships sank before they could get all of the drugs off.

During his four years as a part of PACTACLET, Pitts spent three months in Iraq training Iraqi Marines in hand-to-hand combat , SWAT team tactics , and how to patrol their own rivers.

In his time in the coast guard, Pitts received a lot of medals and commendations. He received the meritorious team commendation; the coast guard presidential unit citation; rifle expert medal; sea service ribbon with one star; unit commendation award with two stars; a global war on terrorism service medal; an Iraq campaign medal with one star; the national defense service medal; and the Navy/Marine Corp achievement medal, to name a few.

The hardest thing Pitts said he had to do was go through the training for the law enforcement team.

He went through a selection process and then a month of grueling physical training.

“Then I had to go through what we called a ready for operations drill, where they put eight of us together in our little training SWAT team,” Pitts said. “We had to stay awake together for about 30 hours. We got no sleep at all. We were constantly getting drilled and clearing out shoot houses — a building SWAT teams use to practice in.”

At the end of his six years in the coast guard, Pitts married Jeanine, of Los Angeles. He had the opportunity to go back into the service, but decided to hang up his boots after thinking on it long and hard with his wife.

The Pitts, who live in San Diego, have two daughters — Grace, a 2 year old; and June, a 7 month old.

Pitts ended up getting his bachelor’s degree in psychology at San Diego State University, and now works at a Veterans Affairs Hospital, doing research on PTSD.

He is the son of Harold Pitts of Georgiana, and Faye Brogden of Glenwood.