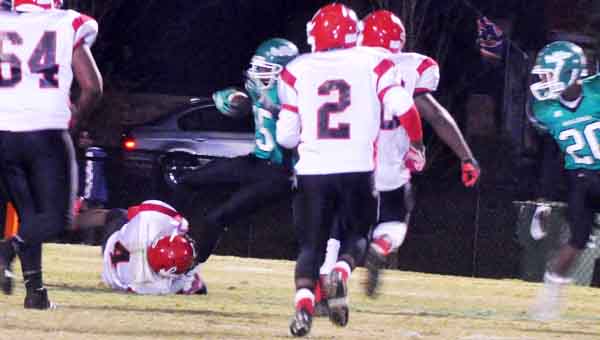 JOURNAL PHOTO | MONA MOORE
With Friday’s win over Loachapoka, Brantley will advance to the second round of the playoffs next week.Friday, Nov. 14.

Brantley High School quickly learned how deep their bench was when several Bulldogs had to sit the first round of the playoffs against the Loachapoka Indians Friday night.

“Seven of our guys were out with the flu today, two of them starters,” Kilcrease said.

And one of those starters was quarterback Jacob Free.

Junior Tre Edwards stepped in for the night. The Bulldogs put up the first points with a safety. Brantley quickly added six more points to the scoreboard with a touchdown from DaRian Jones.

With 4:05 in the first quarter, a touchdown from Dough Salter brought the score up to 14-0.

Kori Foster scored for Brantley with 5:57 in the second quarter. His 34-yard touchdown run brought the score to 27-0.

With 3:05 left in the second quarter, Kaisaun Nichols made a 50-yard touchdown that brought the Bulldogs to a 33-0 lead at the half.

After a few fumbles on the snap in the first half, Edwards settled into the position.

“Any time your quarterback is out, you try just to be effective and Tre did a good job,” said Kilcrease. “I think our offense played well. We ran the ball well.”

Walker’s touchdown run and a successful field goal gave the Bulldogs another seven points with 4:34 left in the game.

The Indians scratched out the goose egg in the third quarter with a touchdown run, making the final score 40-6.

The Bulldogs will take on the winner of tonight’s game between Linden (6-3, 3-1) and Chickasaw (4-6, 2-3). The teams have never met in the playoffs, but Kilcrease predicted the Linden Patriots would make their way to the next round.

The Bulldogs were already starting to get excited about the matchup.

“We’ve got a good history with them (Linden) as far as playoffs. We’ve had them a time or two,” Kilcrease said. “I’m just proud we get to move on to the next round. At this time of the year, you just want to advance.”