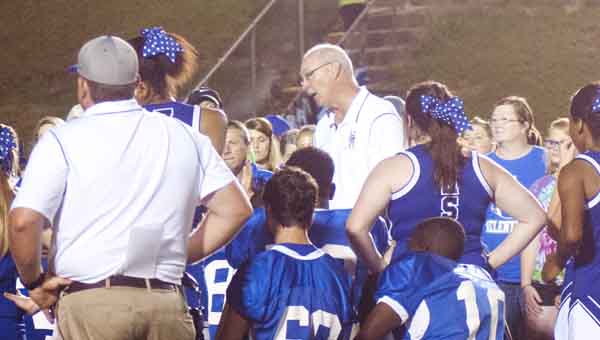 FILE PHOTO
Coach Claude Giddens says a few words to the Flying Squadron, friends and family after the team’s loss to Luverne.

Giddens chose to retire and be with his family in Georgia.

“His original plan was for his wife to work this year in Georgia, and then she would move to this area with him,” said Doug Bailey, Highland Home athletic director. “Her job managing an elementary reading program has expanded to several new counties in Georgia, and she was going to be unable to leave her job in the foreseeable future.”

Instead of continuing to live apart, he made the decision to retire and move back to Georgia.

“It’s bittersweet I have to leave a place for the second time in order to be with my family,” Giddens said.

Giddens, the Squadron’s head coach for the 1999-2000 seasons, returned to Highland Home after retiring from his position as an assistant football coach in LaGrange, Ga. His wife, Denise, has more than 14 years with the LaGrange school system.

“We are obviously disappointed that he made this decision, but we are very pleased with the job he did and completely understand why he chose to retire,” he said. “Coach John Hoffman has been named the interim coach and will be beginning the off-season workout program.”

Giddens said he would miss the students, friends and colleagues he has at Highland Home.

“Truly do care for the community and the kids. I hope they’ll welcome me back for visits in the future,” he said. “Everybody’s been good to me there.”