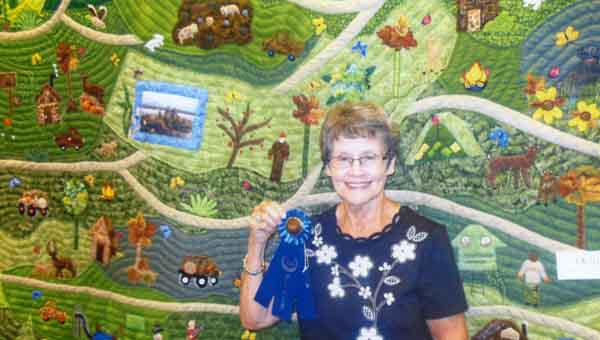 SUBMITTED
Deloris Mount earned a blue ribbon for her quilt of a hunting scene.

Members of the Alabama Farmers Federation Women’s Leadership Committee (WLC) sewed, stitched and designed their way to top honors at the group’s annual contests. Topping those honors was Brantley resident Deloris Mount, who was awarded first place for her quilt depicting hunting scenes.

“This design was something I had never really tried before,” said Mount, who is a five-time winner in the hand-stitched division. Her quilt even included family pictures printed on cloth.

Winners were announced Aug. 9 at a luncheon on the final day of the Federation’s 42nd Commodity Producers Conference in Huntsville.

WLC members competed in two sewing divisions, three quilting divisions and a tablescape design contest where the setting represents a commodity important to the participant’s county. First-place winners in each division received $150, while second and third place were awarded $100 and $75, respectively.

The long-running sewing and quilting contests were first created to showcase the importance of the cotton industry in Alabama.

“Our members always look forward to seeing the beautiful items submitted for these contests,” Federation Women’s Division Director Kim Ramsey said. “Our state boasts of many highly talented seamstresses, quilters and home designers, and this is a chance for them to show off their skills in a friendly competition.”

MONTGOMERY— Decisive wins by farmer-friendly candidates in statewide and legislative races, coupled with return of the U.S. Senate to Republican... read more