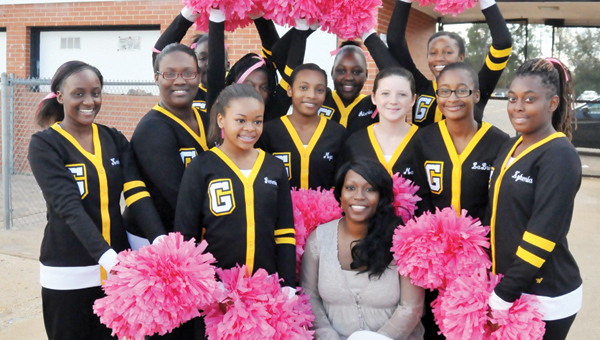 On Oct. 22, Irby had a double mastectomy and the doctors declared her cancer free, which spurred the breast cancer event.

There, students lined up in a formation that spelled out her last name, and cheerleaders even yelled, “we love you Ms. Irby!”

“It meant a whole lot to me,” Irby said about the event at the high school’s football stadium. “To come here from Tuscaloosa — I taught high school my entire time teaching, but I spent last year as a curriculum specialist at a middle school — I was impressed with the compassion and maturity of those middle school age students.”

Irby’s journey began about seven months ago in Tuscaloosa, where she spent 21 years and the better part of her adult life. Irby moved to Greenville with her fiancé, Kelvin Lett, who took the job as the head boys basketball coach at Greenville High School.

“Ironically, the journey began on April 19, the morning of the A-Day game,” she said. “I went to have my first mammogram done that morning before taking my two daughters (Imani, 18; and Hannah Grace, 13) to the game. What a lovely day it was.”

What led her to get her first mammogram done at age 39 — which is one year before women are supposed to have mammograms at regular intervals — was a feeling Irby said she had knowing that something was wrong.

“It was frightening,” Irby said. “I knew something was wrong, but I knew I was going to make it through. I just told myself to soldier up and get through this.”

A follow up sonogram and more pictures five days later on April 24 yielded nothing on the radiological scan, but Irby said she still knew something was wrong.

On May 2, she was diagnosed with Stage 2 breast cancer, almost three months after turning 39.

Irby remembers it well because it was right when her daughter was competing in a state track meet in Gulf Shores.

“I told her of the diagnosis casually as we drove to visit family in Daphne,” she said. “She asked me if I was strong enough to cry. I said ‘no,’ and she said that she understood because I had always been everybody else’s hero. We laughed about that and she told me that they were just ‘boobs,’ and that I didn’t really need them anyway.”

Irby and her daughter went on to enjoy the rest of the weekend, but quickly had to start eight rounds of — as she described it — “large chemotherapy treatments.

Every two weeks, Irby went through the chemo. Her last treatment was held on Aug. 29, right before she started her new job at GMS.

Right after her last treatment, Irby said she started taking Herceptin, a breast cancer treatment drug. She has to be on the drug every week during a whole year.

Irby said she understands and accepts the side effects that go along with taking the drug.

“There are various side effects,” she said. “You lose your hair, and that doesn’t go along well with young woman and losing their hair. I felt like God was gracious to me because a lot of women go through it; they don’t tolerate drugs and throw up a lot. I’ve never had any of that. I’ve never thrown up.

When she started teaching at GMS, Irby said her students didn’t even recognize she had cancer.

“I was able to get it done and here we are,” she said.

While the chemo therapy struck the tumor, Irby said she elected to have the double mastectomy anyway.

“When she went in, they found no residual cancer,” she said. “That’s why my students did the breast cancer walk.

“I don’t have to have radiation and am cancer free,” she said. “But, I still will have to take the Herceptin.”

Throughout this journey, Irby has made sure she’s been there for her girls.

At the start of fall and at the tail end of her chemo treatments, Irby helped move Imani into her dorm at the University of Maryland; and has found the energy to keep up with Hannah Grace and all of her activities.

When asked where her energy comes from, Irby said it’s because of God.

“I really attribute it to the graciousness of God,” she said.

All along the road, Irby said there haven’t been many surprises, only that she’s felt as if others have helped carry her burden.

“I literally feel like I’ve been carried,” she said.

One such example occurred recently when a friend of Irby’s showed up randomly and helped her take care of some to dos because her mom, Doris Moulttrie, wasn’t feeling well.

Additionally, her class schedule has allowed her to not miss any time teaching.

“How lucky could I be that everything worked out perfectly,” Irby asked.

When asked what if any advice that she would give to those who have breast cancer, Irby said the main thing is to remain “positive.”

“I really feel like a good attitude and state of mind really have an affect on your health,” she said. “Instead of me making this into a pity party. I’m enjoying what I can enjoy from it.”

Most importantly, Irby said “love” has sustained her in her journey.

“Love sustained me,” she said. “Love sustained me even when I chose to leave my friends in Tuscaloosa in the midst of breast cancer. I took a job at Greenville Middle School in August of this year, just three months after my diagnosis.”

Tim Williamson died of a heart attack earlier this week at 48. | SUBMITTED PHOTO If somebody was having a... read more