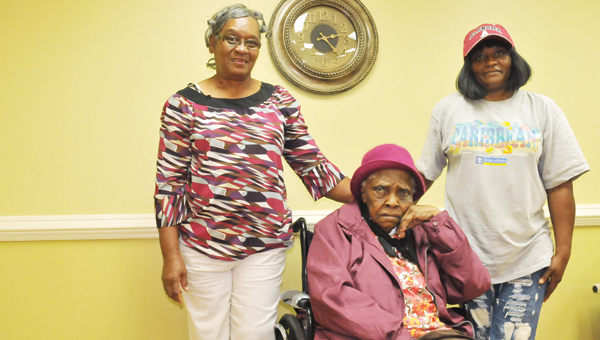 The Georgiana resident and Pineapple native will be celebrating her 105th birthday tomorrow surrounded by family and friends in her assisted-living home.

Walton said her secret to longevity has been her faith in God.

“I’m blessed from God,” she said. “God’s blessed me.”
From an early age, Walton said she’s followed the Lord.

The former avid sewer and house worker was born on Nov. 2, 1909, in the Wilcox County town around 30 miles from Georgiana.

During World War II, Walton said she remembers living in Newton, N. J. with her mother.

Walton’s niece, Mary Coit, said her aunt has voted in every presidential election.

Most recently, Walton voted for President Barack Obama for his two terms in office.

“I know for the last 15-20 years because I always take her,” Coit said about driving Walton to the voting booth. “I take pictures of her when she goes.”

In the last two elections, Walton was a little suspicious of the electronic voting collector.

“She really was excited,” Coit said. “She went to put the paper in the machine and it sucked it up.”

In fact, Walton isn’t keen on anything technology, especially TV.

When she’s not watching TV at her home, Walton can be seen walking up and down the hallways saying hello to others.

“She’s like the energizer bunny,” Coit said. “She gets up by herself, and is very independent.”

“We’re having a little cake and ice cream,” Walton’s niece said. “She doesn’t want to go any where or do anything.”

On her 103rd birthday, Walton got a nice letter from Alabama Governor Robert Bentley.

This year, Walton is hoping she’ll get a letter from Obama.

“The Lord is good,” Walton said. “He’s good and I know and he’s never ever left me. Ever since I can remember, I’ve known the Lord.”

Walton was married to the late Tom Walton for 54 years. She doesn’t have any children, just her nieces, whom she’s taken care of for several years.

A Clinton, Maryland man is behind bars in Butler County after being arrested for allegedly kidnapping a 6-year-old child on... read more