Playground is a go: City receives grant for new equipment 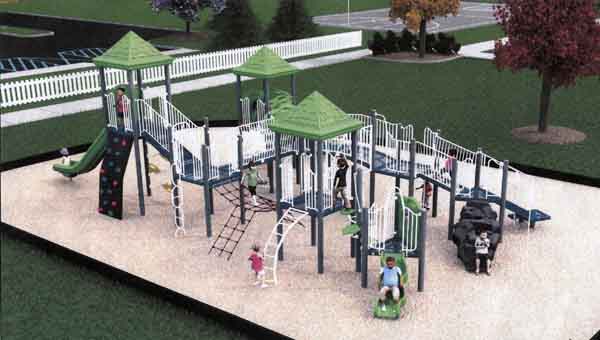 ARTIST RENDERING
The Luverne Park and Recreation Board released a rendering of the new playground that will be built in Turner Park.

The City of Luverne Park and Recreation Board released a rendering of a new playground that will be built at Turner Park.

The previous playground was taken down nearly two years ago because it did not meet safety guidelines.

“Over the past one and a half years, the Park and Recreation Board has been working behind the scenes with the help of the Luverne Kiwanis, local businesses (esopecially Pepsi) and spearheaded by Travis Coquitt to obtain a grant that would enable the Park and Recreation Board to replace the worn out and damaged existing playground equipment,” said a statement issued by the board Wednesday morning.

The statement went on to say delays were a part of any grant process. The wait has nearly come to an end. According to the board, the grant was approved.

“We are now awaiting the release of the funds,” said the statement. “The playground is sitting in the company warehouse, ready to be shipped and installed.”

Board members said the outcome would be worth the wait.

“This beautiful, functional, disability-equipped playground will delight your children and accentuate safety first as the children play for years on this equipment,” said the statement.

As president of the Crenshaw County Association of Volunteer Fire Departments, Stephen Wilson is a bit concerned about the upcoming... read more