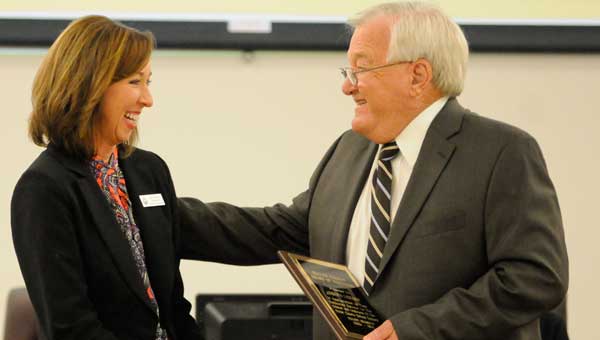 Board of Education member Joe Lisenby (pictured) and Billy Jones were honored for their years of service to the Butler County School System.

The Butler County Board of Education met to acknowledge both past accomplishments and future goals at Thursday night’s board meeting.

The board began with the recognition of two retiring board members, Joe Lisenby and Billy Jones, who combine for more than 30 years’ worth of experience on the Butler County Board of Education.

Lisenby leaves the board following 10 years of service, and he said that his fulfillment came from working with the administrators and teachers that impact the success of the area’s students.

He added that he was most proud of being a part of a school board that did not have to go into debt during the past years of devastating financial shortfalls, and the he is encouraged by the recent work toward vocational training in cooperation with local industries.

“Mr. Lisenby has been nothing but available and supportive in the successes and challenges we’ve dealt with in my first six months as superintendent,” said Butler County Schools Superintendent Amy Bryan.

Jones leaves after 21 years of serving on the board, and has been instrumental in the building of Greenville High School, Georgiana School and W.O. Parmer School, and has worked alongside six superintendents in the duration of his tenure.

“He has always served with professionalism and dignity and maintained ‘Master’s Honor Roll’ recognition for his continued training through the Alabama Association of School Boards,” Bryan added.

The board also recognized McKenzie School for recently being honored with the 2014 Active Schools national recognition award for its commitment to helping students learn, focus and grow through physical activity before, during and after school.

In other business, all six principals from the Butler County School System outlined the plans for their respective schools in regards to the Continuous Improvement Plans initiative.

And though all the principals developed a plan tailor-fitted to his or her respective school, certain points were a recurring theme among each of them, including: an emphasis on wellness, improving math and reading skills, the implementation of iPads and Chromebooks within the classroom, professional development and more.

The board also approved a resolution supporting Amendment 4, which is one of five amendments on the ballot in the upcoming Nov. 4 election.

The amendment would provide local school boards the same constitutional protection from unfunded state mandates as other local governmental entities.

To date, local school boards remain the only local government entity that is not granted state constitutional protection from unfunded mandates, a luxury other entities have enjoyed since 1998.

Amendment 4 would increase the requirement to a two-thirds majority vote rather than a simple majority of 50 percent of the Alabama legislature in order to pass a law that would require local boards to spend more than $50,000 in local funds without providing funds to pay for the increased expense.

“We estimate that nearly a half million of the Butler County School System’s funds are currently obligated to provide for these unfunded requirements,” Bryan added.

“It will be a great help to schools across the state if you (choose to vote in support of Amendment 4),” Lisenby said.