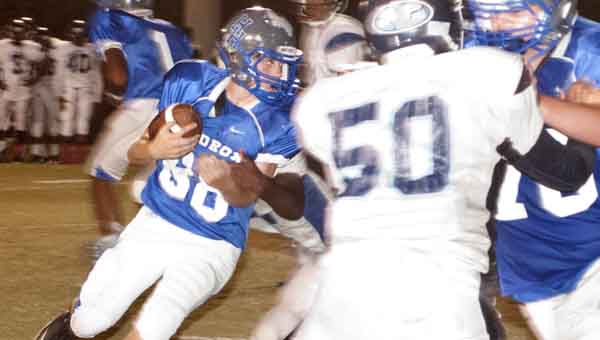 The Flying Squadron earned a decisive win over Calhoun last week. The team beat the Tigers 63-21.

“That was a lot more fun than the previous week,” said head coach Claude Giddens.

That execution included an interception return for a touchdown by Andrew Brown and a couple of passes picked off by Chase Mansmann that set the Squadron up for touchdowns.

“The whole defense played better this week; the offensive line played well. We’ve just got to continue to get better in order to play well against Goshen,” Giddens said.

The team will try to carry homecoming’s momentum into Friday’s region game against Goshen.

“Goshen has really played well. They’ve only lost one region game. Coach Snyder does a great job with them,” said Giddens.

The Goshen High School football team is off to its best start since the 2011 season, currently sitting at 5-2 overall and 4-1 in region play.

The Eagles also secured a playoff birth for the seventh-straight year with a 21-14 homecoming win over Central-Haynesville last week.

clinching a playoff birth was big for the team, but the Eagles’ next goal is to host a playoff game at home. And with a win Friday at fellow Region 2 school Highland Home, the Eagles will secure that home playoff spot.

“The number one thing is we have to hold on to the football,” said Goshen offensive coordinator Jonny Mitchell. “If we can do that, we have a chance to win. We have to get our quarterback some confidence early on and we have to make sure everyone is in the right place against this Highland defense. If we’re not, they can make us look real bad.”

One of the ways Mitchell plans to establish early success on offense is asserting themselves in the run game. Eagle running back Terrainno Griffin has had a few 100-yard rushing games this year and the offense will look to lean on him early in the game.

Once the run game is established, Mitchell said the offense can work in pass plays to keep defenses honest and think twice before putting eight or nine defensive players in the box to stop the running game.

Friday’s game will be a big one for Highland Home, especially if the team wants to see the playoffs.

Bulldogs go for bite of McKenzie