Bulldogs go for bite of McKenzie 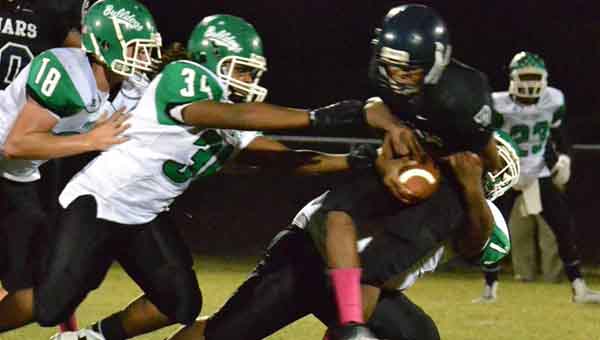 CONTRIBUTED PHOTO | CINDY JORDAN
Brantley freshman Nathan Renfroe (18) and junior Alphonso Gulley (34) attempt to strip the ball from Barbour County. Most of the Bulldog roster took part in the 62-12 win.

Last week’s big win against Barbour County may have been just what the Brantley Bulldogs needed before Friday’s face-off against the McKenzie Tigers.

Head coach Ashley Kilcrease said his players rediscovered their love for the game.

“We got to play a lot of people, which is a good thing,” he said. “And they seemed to be having more fun. Everybody was excited.”

The highlights included touchdowns and interceptions from players who aren’t often on the field. The players had that opportunity because of an early lead from veterans like Kori Foster, who scored two touchdowns and Darian Jones, who added three touchdowns, two pass receptions and one punt return to the night’s list of successes.

“They all played well,” Kilcrease said.

Friday’s game against the undefeated McKenzie Tigers will be for the region championship.

“There’s a lot riding on it,” Kilcrease said.

The winner will earn homefield advantage in the playoffs, a huge advantage, said Kilcrease.

The McKenzie Tigers clinched a homefield advantage with last Friday’s 51-14 win over Florala. Like Brantley, the Tigers had a good time at last week’s game, said head coach Josh McLendon.

“We started out fast and defense did a good job early on,” McLendon said. “We came out and played with a lot of enthusiasm right from the beginning and we just had a good time and had fun.  It was an all-round good game, I thought.”