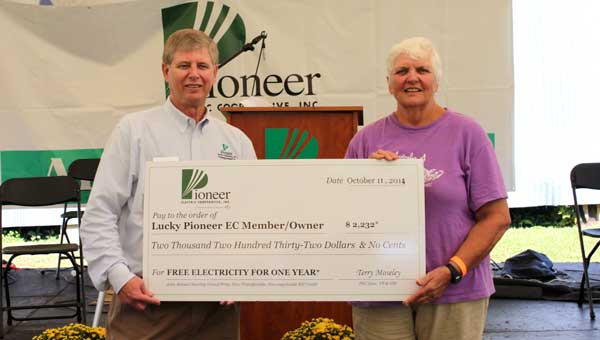 Down-home melodies, demonstrations on the dangers of power lines, and an attraction that took you “up, up and away.” All this and more was on tap for the 200-plus Pioneer Electric Cooperative members and their families at PEC’s Annual Membership Event last Saturday morning at the Butler County Fairgrounds in Greenville.

Members lined up inside James Peavey Exhibit Hall for a chance to enter a drawing for one of  10 $75 power bill credits along with the coveted grand prize, valued at more than $2,300, of free electricity for a year.

Mary Brown of Greenville was the lucky grand prize winner, while

A special display with miniatures allowed the younger set to see just how powerful—and dangerous—a power line can be when safety rules are not followed.

Attendees also were able to “set a spell” under the tent and wave their PEC hand fans in time to the music as they listened to popular local band, Southern Legends. The band, consisting of Edna “ET” Thomas and her brother Leroy Thomas on guitar, Cleve Poole on bass, Bruce Bennett on drums, and Judy “Buddy” Manning on vocals, invited fans to join them at the G-Ana Theater the third Sunday night in November for more classic country and rock and roll.

There were long lines for the Touchstone Energy hot air balloon, providing tethered rides to all those adventurous enough to try it.

“This was my third ride on one of these,” said University of Alabama student and dedicated balloon enthusiast, Susanna Coleman. “I’m hoping to work my way up to a regular ride at some point.”

The members in attendance were able to vote for trustees in Districts 3, 6 and 9 as well as learn more about the Cooperative during the meeting held mid-morning.