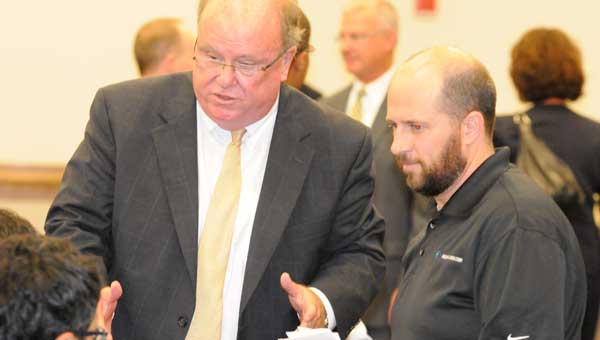 It was more than a little appropriate that Hwashin America announced on a Columbus-Day Monday morning a $34-million, 100,000 square-foot expansion at LBW’s Wendell Mitchell Conference Center.

On the day set aside for celebrating discovery and progress, Greenville mayor Dexter McLendon explained how the arrival of Hwashin 11 years ago was one of the best things to ever happen to the city.

“There’s a lot to be said about Columbus Day and about Hwashin in the same breath, and that is that when you all came, it really started to change our city,” McLendon said.

“There are a lot of employees that are out there, and a lot more employees to come, and we’re excited about that.”

Josh Simmons, Hwashin Human Resources Manager, said that the expansion would center on the Hyundai Elantra.

“With that expansion, we will be adding 50 new jobs to our already existing 750 employees that we have there, so that’s good news for our community.”

Simmons also added that a completion date for the project hasn’t been set yet, but that construction would begin this month.

“As soon as possible—that’s what I can tell you,” Simmons added.

“This is an over $34-million expansion. Part of that is for the building expansion, and the other portion is for the machinery that we have coming in.”

Rod Cater, chairman of the Butler County Commission for Economic Development, added that the expansion could reverberate in a positive throughout the county, and not just those directly affected by the 50 new job opportunities.

“I’d also like to thank you not only for investing in the building and the jobs and the equipment, but also that it’s an investment in the community,” Cater said.

“Of course, the people that are going to come to work are being impacted directly, but I think everyone in Butler County is going to be impacted indirectly.  You’re increasing and improving the quality of life right here in Butler County, and that’s so important.”

Twelve Butler County students will spend the next several months preparing for the regional phase of the National Poetry Out... read more