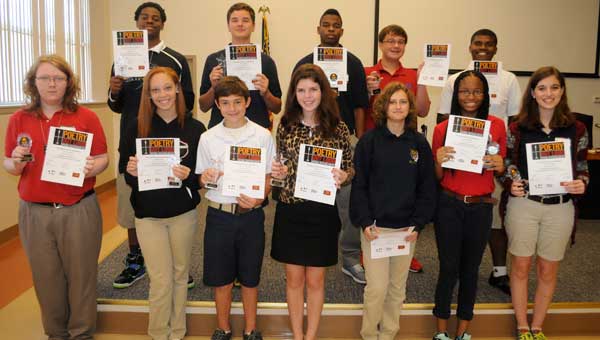 The Butler County School System has crowned its representatives in the 2014 Poetry Out Loud competition, held Oct. 9.

A dozen local students were chosen to represent the county in the competition’s regional phase, scheduled for January.

Poetry Out Loud is a national arts education program that encourages high school students to learn about poetry through memorization, performance and, finally, competition.

The contest also extends to the state level, where each winner will receive $200 and an all-expenses-paid trip to Washington to compete for the national championship.

The state winner’s school will receive a $500 stipend for the purchase of poetry books, and one runner-up in each state will receive $100, with $200 for his or her school library.

The state finals will be held at the Alabama Shakespeare Festival in Montgomery on Feb. 16.