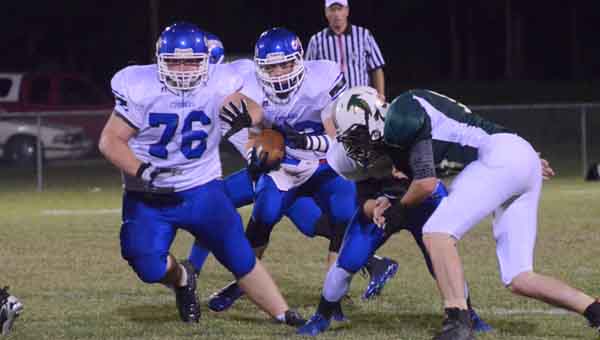 “We came out lukewarm,” he said. “We moved all the way to the 10 first quarter and couldn’t get anything out of it.”

Gibson blamed the slow start on Ashford’s defense. He said the team was big and strong. The Cougars found a few cracks in the Ashford wall, scoring 15 points by the half.

“The team played hard,” Gibson said of CCA. “We played a lot better in the second half and did what we had to do to win, but we left some points on the table.”

He praised his defensive line, which managed to shut out Ashford. “The closest Ashford got to scoring was the 50-yard line.”

Offensively, Dalton Weeks and Colten Kelley dominated the field. Weeks had 103 yard rushing with two touchdowns. Kelley was 10 for 20 with 175 yards passing and one interception.

Friday’s win was a big one for CCA. It put them in the regional playoffs and a step closer to a first-place finish. The Cougars will play Chambers Friday and travel to Cornerstone Christian for its final regional game next week.

“If we win those two we win the region,” Gibson said.

This week is homecoming, but it should feel like any other week for the Cougars. In hopes of keeping the players focused, Gibson said his team would not be participating in any homecoming activity after 3 p.m.

“We’re playing a big ballgame,” he said. “If we win Friday, we are guaranteed at least a share in the region games, which means we would host a game instead of having to travel west.”