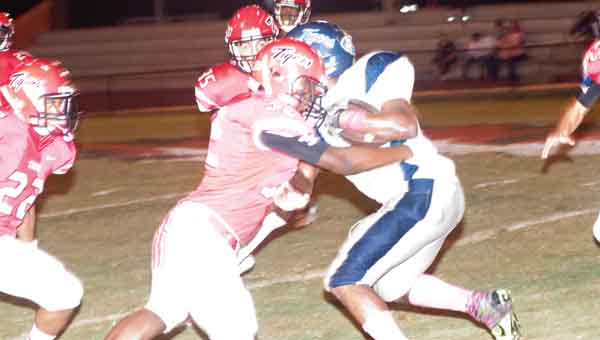 The Luverne High School Tigers kept their eyes on one particular Calhoun Tiger during Friday’s game.

“We knew number four was really, really good and didn’t want to kick to him,” said head coach Mike Dubose. “And we didn’t kick to him but once. He is really a good player.”

Luverne had several standout players during the homecoming game.

Kenterius Womack was 7 of 8 for 121 yards and one touchdown.He carried the ball six times for 71 yards and a touchdown.

Uriah Brown had one carry for 16 yards and one touchdown. He had two catches for 21 yards.

Darius Upshaw had two catches for 53 yards and a touchdown.

Austin Bryant had one catch for 44 yards.

The Tigers held Calhoun at 5 of 14 passes for 76 yards and two interceptions. Calhoun had 24 carries for 6 yards.

The defense held them to four first downs and LHS had seven first downs.

Austin Odom had an interception return 50 yards for a touchdown.

Tai’Shawn Peagler had an interception return for 12 yards.

Overall, Dubose was pleased with Luverne’s performance. The final score was 48-6 Luverne.

“I’d like to see us run the ball a little more authoritatively, but we’re making progress,” Dubose said.

Luverne will travel to Elba Friday. Based on the film he’d’ studied, Dubose said Elba was the best team he’d seen this season.

“They are big, fast, strong and talented,” he said.